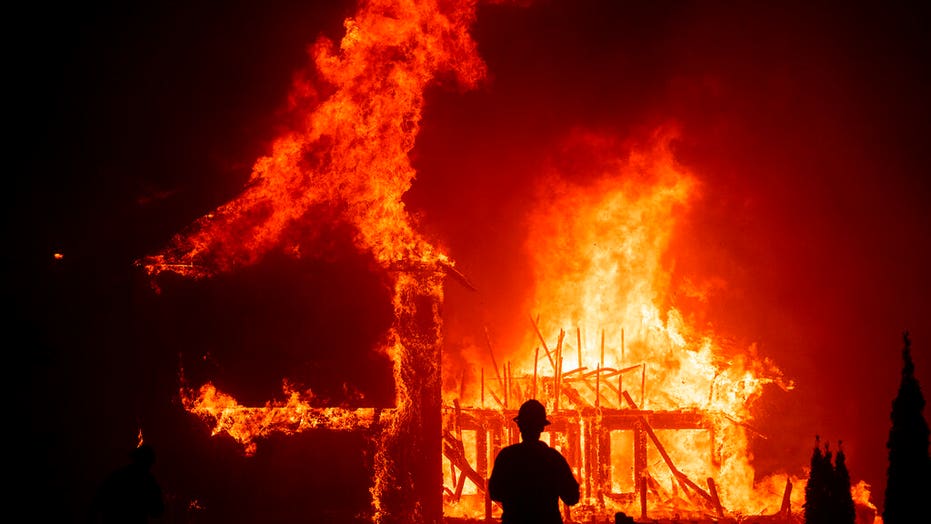 "Our equipment started that fire," said Johnson, who apologized directly to the victims' families. "PG&E will never forget the Camp Fire and all that it took away from the region."

FILE: A home burns as a wildfire called the Camp Fire rages through Paradise, Calif.  (AP)

Johnson’s admission, which was part of a plea deal, came during an online court hearing designed to publicly shame the utility for neglecting its infrastructure.

Butte County Superior Court Judge Michael Deems read the name of each victim aloud in the courtroom while the images of the dead were shown on a large screen as Johnson entered a plea for each of the counts. The fire killed 85 people, but prosecutors weren't certain they could prove PG&E was responsible for one of the deaths.

PG&E has agreed to pay a maximum fine of $3.5 million for its crimes in addition to $500,000 for the cost of the investigation.

FILE: Christina Taft, the daughter of Camp Fire victim Victoria Taft, displays a collage of photos of her mother, at the burned-out ruins of the Paradise, Calif. (AP)

The company has agreed to pay $25.5 billion for losses from the 2018 fire and other blazes in 2017 blamed on its crumbling equipment. The company says it has made changes that will create a more reliable and safer electrical grid, although it still expects to rely on deliberate power outages during the next few years to minimize the risks of causing more fires.

The proceeding unfolded as PG&E approaches the end of a complicated bankruptcy case that the company used to work out $25.5 billion in settlements to pay for the damages from the fire and others that torched wide swaths of Northern California and killed dozens of others in 2017. The bankruptcy deals include $13.5 billion earmarked for wildfire victims. A federal judge will formally sentence PG&E on Thursday or Friday, Ramsey said.

Since filing for bankruptcy early last year, PG&E says it has been dramatically altering a corporate culture that prioritized profits for its shareholders over the safety of the 16 million people who rely on the utility. As part of a deal with California power regulators, PG&E will replace 11 of its 14 board members. CEO Bill Johnson will step down June 30.