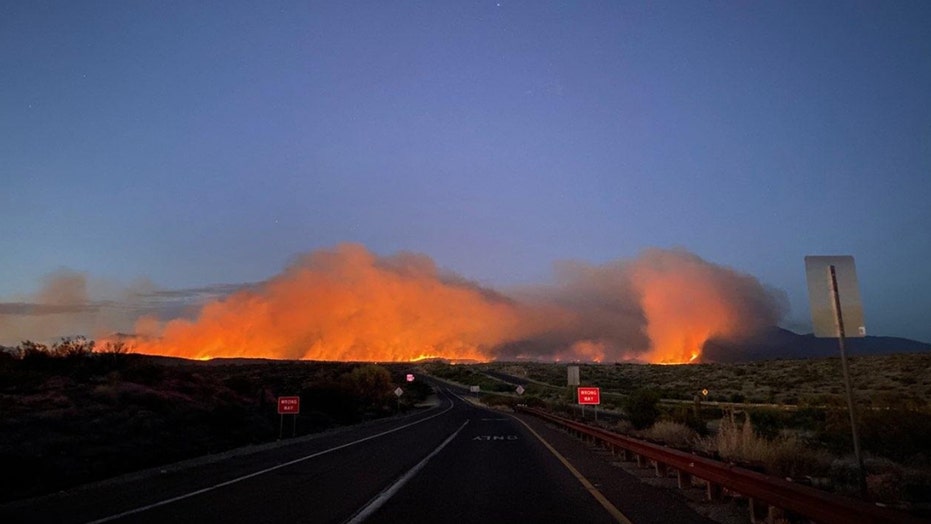 Evacuations have been ordered for areas northeast of Phoenix as a raging wildfire more than doubled in size Monday, and two other large blazes continued to burn in Arizona.

The Gila County Sheriff's Office said in a news release that the communities of Tonto Basin and Punkin Center have been ordered to evacuate as the Bush Fire grows in Tonto National Forest.

As of Tuesday morning, the blaze northeast of Phoenix was just over 64,513 acres with zero percent containment. The sheriff's office said those in areas under evacuation orders face "imminent" and "life-threatening danger."

"If you choose to ignore this advisement, you must understand emergency services may not be able to assist you further," officials said.

Officials said the communities of Jake's Corner and Sunflower have been placed on pre-evacuation status.

Residents have been advised to pack a "go bag" with essential items due to the "significant danger" in the area.

The scope of the blaze was captured Monday from a satellite 23,000 miles overhead.

The fire started on June 13 and spread quickly amid hot, dry and windy conditions. According to InciWeb, the fire is human-caused and remains under investigation.

The Arizona Department of Transport closed two state routes near the national forest due to the fire.

Video released by the Arizona DOT shows the fire burning off State Route 87.

The Red Cross has set up a shelter at Lee Kornegay School in Miami for those evacuated from the area, according to FOX10.

More than 300 fire personnel have responded to the fire, including 11 engines, three hotshot crews, two helicopters and one air attack tanker, officials said.

The Mangum Fire that's burning near the Grand Canyon continues to grow as Red Flag conditions and wind returned on Tuesday.

As of Tuesday morning, the fire had scorched some 29,689 acres and was only 3 percent contained, according to InciWeb.

The fire has turned to the northwest, away from the Grand Canyon National Park, but "moderate" fire activity was reported north of Jacob Lake.

The North Rim of the Grand Canyon National Park remains closed and is inaccessible, as a state highway remains closed. More than 500 firefighters have responded to the blaze.

Increased humidity on Monday showed the spread of a fire that's been burning since June 5 outside of Tuscon.

The Bighorn Fire is in the Catalina Mountains on the Coronado National Forest. As of Monday night, the blaze has reached 14,686 acres with only 30 percent containment.

Officials said a "large contingent" of engines and crews continued preparatory work around the community of Summerhaven to make a fire line. Around 729 fire personnel are involved in the response.

"Threats to the East Golder Ranch and Saddlebrook communities have greatly diminished due to the direct suppression work conducted by crews and air operations over the past several days," officials said on a Facebook page set up for fire updates. "Residents will continue to see firefighters in the area patrolling and doing additional preparation around communities that border the north and south edges of the fire."

Several communities are under pre-evacuation notices in case the situation worsens.

The fire threat continues across the Southwest and into the Plains on Tuesday. (Fox News)

Over the Southwest, elevated to critical fire weather persists on Tuesday due to very dry, windy and hot weather.

Red-Flag warnings are up for parts of Nevada to the high plains of eastern Colorado and western Kansas.