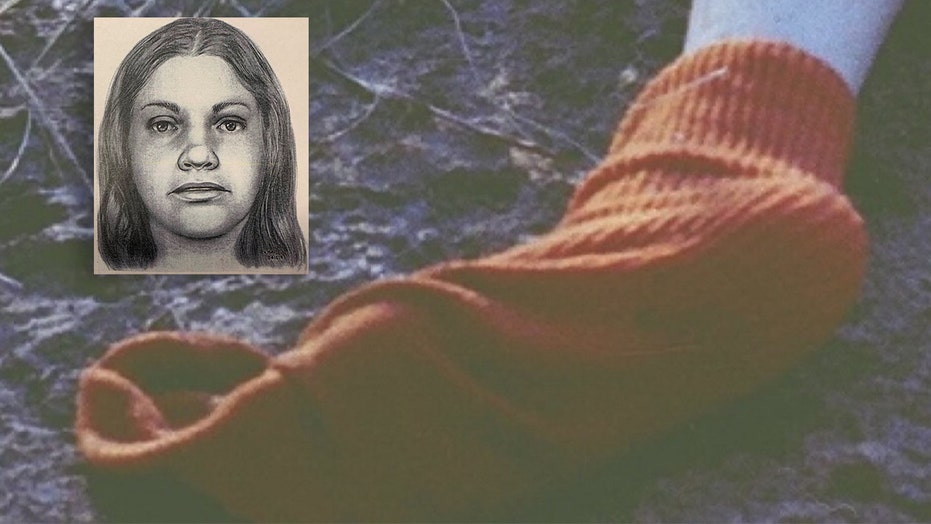 Authorities in Texas are hoping a new sketch will finally help identify a cold case victim found naked on the side of a highway nearly four decades ago.

The Williamson County Sheriff's Office issued a new sketch Wednesday of a woman known only as the "Orange Socks" murder. The unidentified woman was discovered dead on Halloween of 1979 face-down in a ditch along Interstate 35 north of Georgetown, Texas.

"Obvious victim of a homicide," Sgt. John Pokorny with the Williamson County Cold Case Unit told FOX7. "She was nude, the only thing she was wearing was orange socks, that’s how we issued her name. We have little to no leads that have been going on.”

In the nearly 40 years since the woman was found, nobody ever claimed her body leaving authorities stumped on figuring out her identity in addition to who killed her.

A new sketch of a victim known as the "Orange Socks" murder. The woman was discovered face down in a ditch along Interstate 35 in Texas on Halloween of 1979. (Williamson County Sheriff Office)

In 1982, Henry Lee Lucas confessed to picking up the woman in Oklahoma and killing her along the interstate, dumping her in Williamson County. Lucas was eventually tried for murder, convicted and sentenced to death but later recanted his confession.

Former Williamson County District Attorney Ed Walsh told FOX7 last May that Lucas "recanted on almost all his confessions after the trial."

"Nobody knows how many people he killed," Walsh said at the time. "He certainly didn't kill everybody he claimed to have killed."

Lucas had confessed to committing 600 murders in more than 20 states in the 1980s, but was only sentenced to death for the Orange Socks slaying. He was already serving six life terms for nine other killings, the New York Times reported at the time.

His case was reviewed by then-Texas Gov. George W. Bush in 1998, who decided to commute his sentence to life in prison because there was evidence Lucas was in Florida at the time of the murder in addition to his recanted confession that was the only thing to link him to the slaying. Lucas ended up dying in a Texas prison in 2001.

The department's cold case unit hopes the new sketch of “Orange Socks,” done by a forensic artist, will generate new leads in the case.

“We’re gonna keep doing what we can to help bring a voice to her, identify her and in the end bring those responsible to justice,” Pokorny told FOX7.

In January, Sheriff Robert Chody said that preliminary forensic evidence testing on DNA found on the victim's socks revealed two or more male contributors. The DNA was further being processed to separate the contributors and generate possible profiles, FOX7 reported at the time.

Jennifer Dulos went missing after dropping her children off at school; investigators are still searching for the answer to her disappearance.

Authorities believe that advances in DNA testing will eventually reveal who the suspects are and who the victim is, and reminded the public this week that public genealogy databases are key to helping law enforcement solve such cases.

Pokorny told FOX7 that genealogy database sites that allow users to “opt in” or “out” of allowing law enforcement to utilize their profiles may end up making work much tougher for investigators.

“The only way we can go through and research unidentified person to help identify them, is through those databases there’s other law enforcement databases we can research but those are more suspect driven,” he said.

Pokorny added that sites that analyze DNA data from other fee-based genetic genealogy testing companies are what can help them finally solve this nearly 40-year-old mystery in Texas.

Anyone with information on the case is asked to contact the Williamson County Sheriff’s Office Cold Case Unit at 512-943-5204.