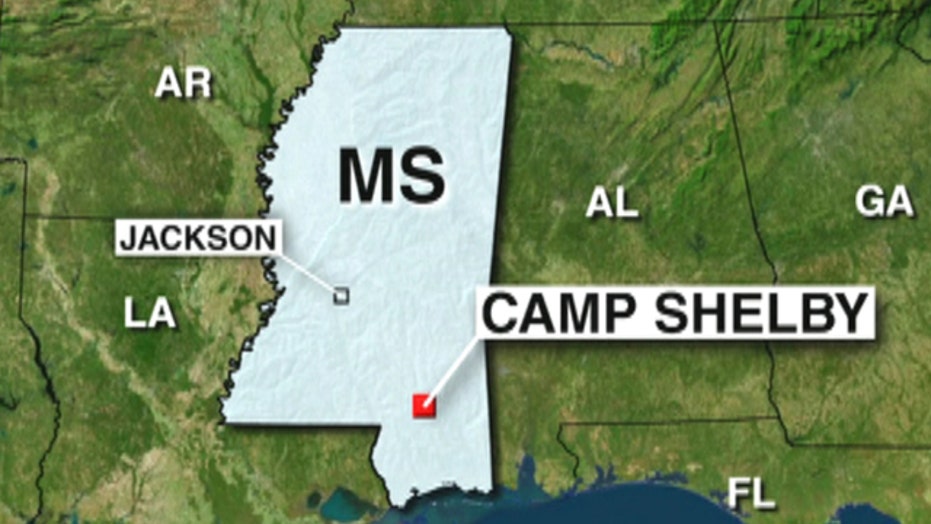 MyFoxAL.com reported that police were searching the area near the camp's southern boundary when a maroon truck passed them and a shot was heard. Police pursued the man, who claimed his truck backfired.

Authorities in the area have been on high alert after reports of shots fired on Tuesday. Soldiers at the facility reported shots fired into the air at about 8 a.m. on Wednesday.

Lt. Col. Christian Patterson said it was in the same area where soldiers reported gunshots fired from a pickup truck a day earlier,

The military, in the meantime, said the post is secure, and all personnel are accounted for.

Gov. Phil Bryant is urging soldiers statewide to "defend themselves as necessary" after the second report of gunfire.

Shortly after soldiers training at the Camp Shelby Joint Forces Training Center reported the shots fired Wednesday morning, Bryant said all available personnel would be used to find and arrest the suspect.

The National Guard has said that the description of the shooter is the same for the incidents on both Tuesday and Wednesday: a white male in a red pickup truck, make and model unknown.

"Everybody out there can rest assured that our security is enhanced. It's something that we take very seriously and that we look at constantly in order to ensure that it's strong"

After a shooting rampage at military sites in Tennessee last month, Bryant ordered guards at all military base entrances in Mississippi armed. He cited that move in his statement Wednesday urging military personnel to protect themselves.

"Everybody out there can rest assured that our security is enhanced. It's something that we take very seriously and that we look at constantly in order to ensure that it's strong," said Patterson.

No one was wounded in the Tuesday shooting, which occurred near a checkpoint at the post. Authorities were quick to point out that shooting took place outside the base perimeter.

"This incident occurred along the eastern edge of Camp Shelby. It did not occur on the base," County Sheriff Jimmy Dale Smith said at a news conference.

When asked whether it was an intentional shooting or possibly something like a hunting incident, Smith said it was not known. Earlier reports that two people were involved proved to be wrong, he said.

The base is currently hosting about 4,600 active-duty soldiers, National Guard and reservists from Texas and Mississippi in a summer training exercise.

This summer's training focuses on teaching troops how to operate on the platoon level -- generally about 30 soldiers to a group, although that can vary.