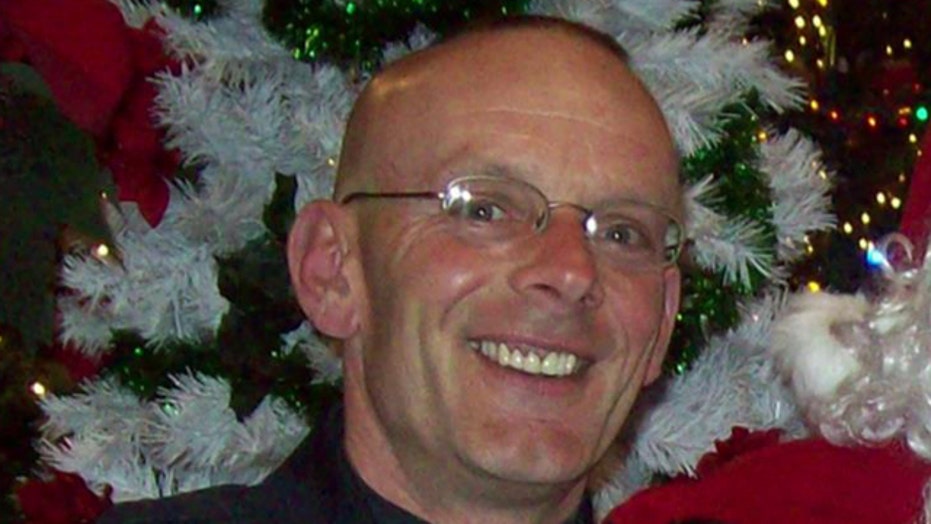 Dramatic audio reveals the tense moment when Illinois police officers discovered the body of a fellow Fox Lake cop lying in a marsh on Tuesday morning, stripped of his gun.

“Send everybody you possibly can,” an unidentified police officer says. “Officer is down.”

Police are appealing to the public for help as they widen the perimeter in the search for the killers of 30-year veteran Lt. Charles Joseph “Joe” Gliniewicz, 52. There are few specifics as to who exactly authorities are searching for, however, as the manhunt enters its second day.

Two white males and one black male have been identified as suspects in the death.

Gliniewicz was shot at approximately 8 a.m. local time Tuesday after he radioed in to tell dispatchers he was chasing three men on foot in Fox Lake. The officer did not make contact with the individuals as a result of a 911 call, but rather he "self-responded," according to Lake County Major Crimes Task Force Cmdr. George Filenko.

"Whatever the case was, the only description was he was going to be out with those three suspects and it was a suspicious circumstances call,” Filenko said during a Wednesday afternoon news conference.

Colleagues who responded as backup found Gliniewicz shot in a marshy area near U.S. Highway 12, a main road through the village of about 10,000 people near the Wisconsin border and about 55 miles northwest of Chicago. He was pronounced dead at the scene.

Police wouldn't say whether Gliniewicz was shot with his own gun, if another weapon was involved, whether any video of the encounter had been captured -- on a dash cam or from anywhere else -- and if there were any witnesses.

Filenko said there had been preliminary discussions about offering a reward in the case, but nothing had been finalized.

Officers continued canvassing the area on Wednesday, and Filenko said cops believed that the suspects were, at least initially, on foot.

“I'm not gonna set a time limit on this," Filenko said. "I have a murdered colleague, a police officer. And we’re not gonna stop.”

During a earlier news conference, Police appealed to the public for tips. A nationwide alert has been issued for the three suspects, though little more than a general description is known.

“Residents need to keep a watchful eye and report any suspicious activity,” Detective Christopher Covelli said. “Anything out of the ordinary. The public can help. If they see something unusual, report it.”

Covelli said cops had widened their original search area and were engaging in “saturation patrols.”

“We’re gonna continue to be out there, continue to work very hard, work with the community,” Covelli said.

Filenko described the officers who carried on the manhunt Wednesday as "tenacious."

“They’re focused," he said. "Energetic. And they know exactly what there mission is.”

Schools in the area remained closed Wednesday due to the ongoing canvass.

As the search continued, dozens gathered for hours along a street in the village to show their support for law enforcement officers.

An emotional Fox Lake Mayor Donny Schmit described the murdered officer as a personal friend, a three-decade member of the department and a father of four sons.

"We lost a family member," Schmit said of the officer known around town as "GI Joe." ''His commitment to the people of this community has been unmatched and will be dearly missed."

Gliniewicz's death is the third law enforcement fatality in Illinois this year, according to the Law Enforcement Officers Memorial Fund. It says firearms-related deaths in the U.S. are down 13 percent this year compared to the same period last year, Jan. 1. to Sept. 1; there were 30 last year and 26 this year.

"When an incident like this happens, it victimizes not just the police department, but the whole community," Covelli said. "And we are here for them.”