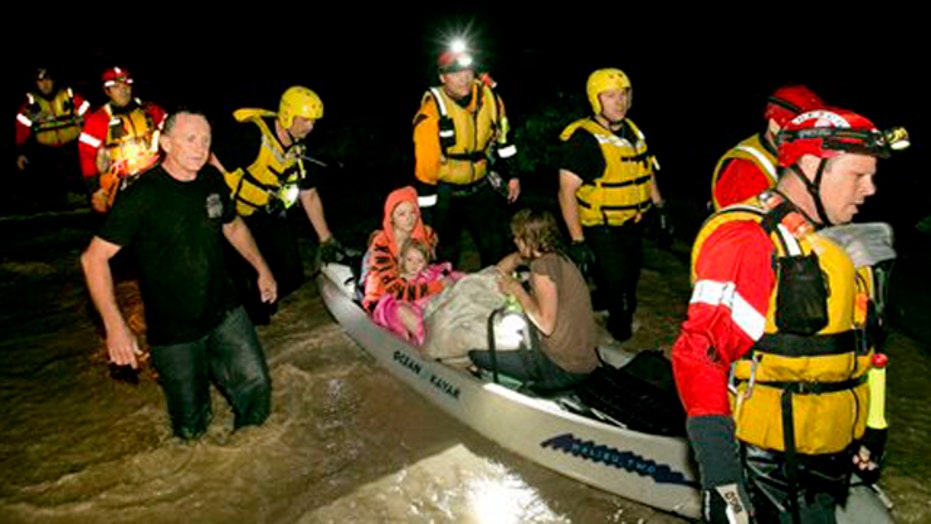 Rescue crews pull dozens of people from floodwaters in Texas

President Barack Obama signed a disaster declaration for Texas late Friday after the state suffered severe flooding throughout the week.

The White House said Obama ordered federal aid to supplement other recovery efforts affected by the severe weather since May 4. Texas Gov. Greg Abbot had requested a presidential declaration to get federal help for the affected counties earlier Friday after declaring a state of emergency for 24 more counties.

At least 30 people have been killed in storms that began in Texas and Oklahoma over Memorial Day weekend. Twenty-six of the deaths have been in Texas alone, and 11 people were still missing Saturday.

The Brazos River southwest of Houston was the main area of concern Saturday as floodwaters moved from North and Central Texas downstream toward the Gulf of Mexico. Floyd Preston's home in the Houston suburb of Rosenberg is about 100 yards from the flooded river and three houses from a police barricade marking the evacuation zone.

Earlier in the week, the Colorado River in Wharton and the San Jacinto River near Houston were threatening homes, but the National Weather Service said both are expected to recede below flood stage by Sunday. Wharton authorities said Saturday they were considering lifting a mandatory evacuation; residents from 30 homes were ordered to evacuate Friday.

In Central Texas, about 2,000 volunteers and 100 members of an elite search and rescue team looked for a group of people whose vacation house was swept away in a massive flood on the Blanco River.

Toby Baker, a commissioner with the Texas Commission on Environmental Quality, had come in an unofficial capacity, as a childhood friend of one of the missing. "I've got a young family," he said Friday while leading a group of volunteers in a search. "I'd like to think someone would come out and do the same for us."

Among the missing is 6-year-old William Charba, the son of Randy Charba, 42, and Michelle Charba, 43. Michelle's body was found Wednesday. Michelle's mother, Sue Carey, 71, is still missing, but officials said late Friday they had identified the remains of her father, retired dentist Ralph Carey, 73.

Jonathan McComb, the lone survivor from the house, and his family had joined the Charbas and the Careys for the holiday weekend, all coming from Corpus Christi. McComb's wife, Laura, 33, and 4-year-old daughter, Leighton, are still unaccounted for. The body of their 6-year-old son, Andrew, was found Wednesday in the river.

This week's record rainfall in Texas eased the state's drought and swelled rivers and lakes to the point that they may not return to normal levels until July.