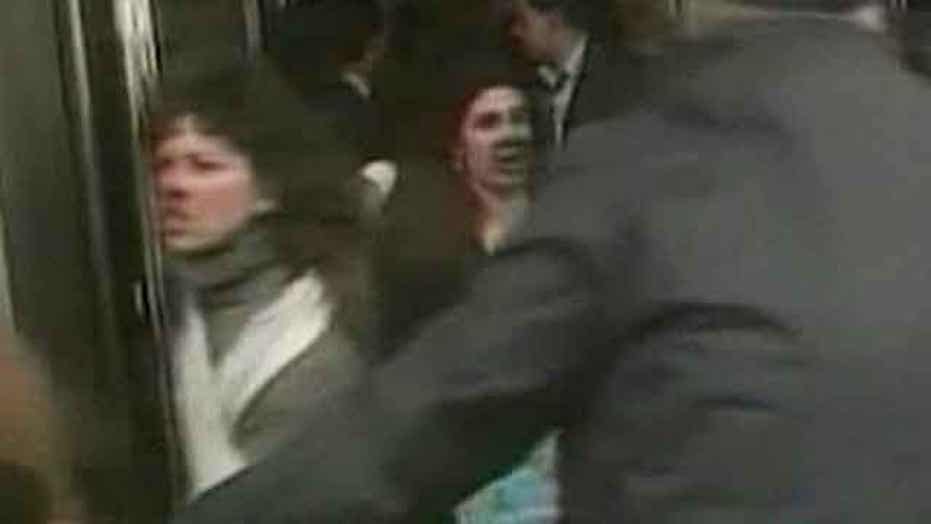 NEW YORK – The two terrorist attacks on the World Trade Center, eight years apart, converged Tuesday in the form of a piece of granite -- part of a memorial to those who died in 1993 that was itself destroyed on Sept. 11, 2001.

The jagged fragment was displayed during a ceremony marking the 20th anniversary of the 1993 attack.

A bell tolled for a moment of silence at 12:18 p.m., the exact time of the explosion under one of the twin towers that killed six people. More than 1,000 people were injured when terrorists detonated a truck bomb in an underground garage.

Family, friends and city officials stood near the memorial to those who perished in the 2001 attack, which toppled the same tower targeted in the 1993 explosion.

"There are some days when you can't remember what he sounded like, but then there are other days when you expect to see him in the morning, when you wake up," Stephen Knapp said after the ceremony, his voice breaking as he remembered his father, also named Stephen Knapp. He was 18 when his father died.

On Tuesday, Knapp joined about 50 people -- including Mayor Michael Bloomberg and former Mayor David Dinkins -- for the anniversary ceremony.

White roses were laid over the six names chiseled into granite over one of the 9/11 memorial's two reflecting pools, alongside the names of more than 2,700 people killed in 2001 when terrorist-hijacked planes brought down the twin towers.

A wooden box was opened to reveal the piece of broken granite that was once part of the memorial fountain honoring the dead from 1993 on a plaza above the explosion site.

Only the name "John" -- John DiGiovanni, who died in 1993 -- survived on the fragment recovered after the Sept. 11 attack.

New York Police Commissioner Raymond Kelly said recently that the earlier attack was the first dramatic demonstration that "terrorism is theater and New York is the biggest stage."

Six Islamic extremists, including mastermind Ramzi Yousef, were convicted of carrying out the 1993 bombing.

At first, officials assumed it was an accident, a possible transformer explosion.

Kelly raced to the scene, where the bomb planted in a parked Ryder van had left a crater half the size of a football field in the trade center garage, causing more than a half-billion dollars in damage.

"I remember seeing this tremendous sea of first-responder vehicles ... and smoke was coming out," said Kelly, who was in his first stint as police commissioner.

It was only the next day that authorities concluded the blast was a bomb.

Investigators then found a vehicle identification number on a piece of the blown-up van that they traced to Mohammed Salameh, who had rented the vehicle.

Knapp brought along his two daughters, ages 4 and 6, saying it was an opportunity to do more than mark a horror of the past.

"I want to show them the good that can come from it, and how people stand together and they rebuild," he said.

Towering above the 9/11 memorial is 1 World Trade Center, the skyscraper replacing the twin towers that will be the tallest building in the Western Hemisphere when completed next year.