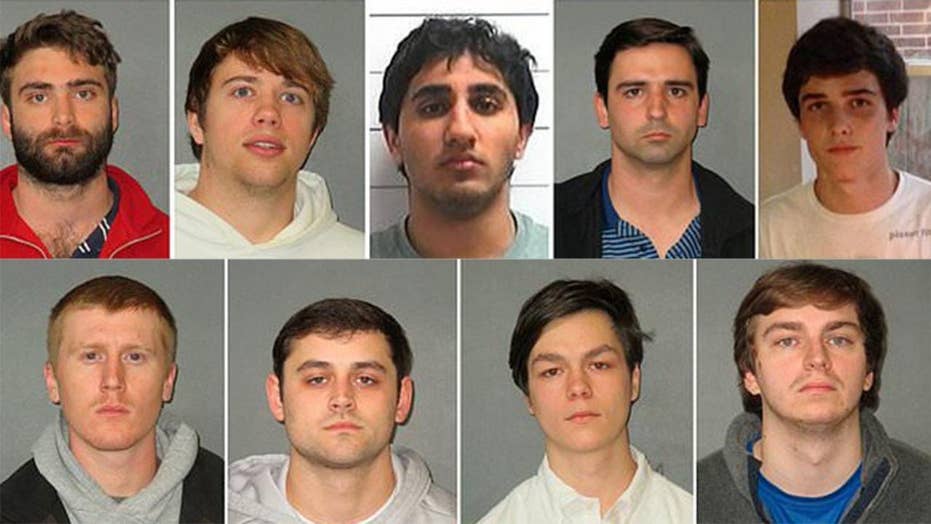 Nine fraternity members at Louisiana State University were arrested on Thursday for charges connected to shocking hazing incidents that took place last fall, according to reports.

The Delta Kappa Epsilon members, all aged between 19 and 23, stand accused of kicking pledges with steel-toed boots, beating them with a metal pipe and urinating on them, among other horrific offenses, Buzzfeed News reports.

Duckworth has been charged with the most serious crimes of the group: three felonies for battery and false imprisonment and three charges of criminal hazing. Eymard, McNiece and Gilotra are all facing felony battery charges, and the rest of the students have been hit with misdemeanor charges for criminal hazing.

Duckworth and McNiece are reportedly not enrolled in LSU this semester, the school said. The Delta Kappa Epsilon chapter was officially shut down at LSU last month in response to the shocking allegations of hazing.

One student seeking to join DKE said he was forced to get naked, climb inside an ice machine that was filled with water and frozen ice, and stay there for 30 to 45 minutes. (Google )

One student seeking to join the fraternity said he was forced to get naked, climb inside an ice machine that was filled with water and frozen ice, and stay there for 30 to 45 minutes. According to an affidavit, he said he didn't get out of the ice machine because "he felt he would have been beaten up if he did."

After he was allowed to get out of the ice machine, he reportedly was forced to lie on his back on a basketball court covered in broken glass alongside another pledge, where they were "sprayed with a hose, had milk crates thrown at them, and were urinated on."

Another pledge told investigators that he was once doused with gasoline.

Greek life at LSU has been under scrutiny for some time now, following the 2017 death of 18-year-old Maxwell Gruver. While pledging the Phi Delta Theta fraternity, he was allegedly forced to drink so much that his blood alcohol level spiked to 0.495 percent, causing him to die of alcohol poisoning. Four fraternity members were subsequently charged in connection to Gruver's death, and the boy's parents filed a $25 million federal lawsuit against the university board.

LOUISANA SUSPECT IN KILLING OF 5 CAPTURED IN VIRGINIA AFTER MANHUNT, POLICE SAY

Following the DKE arrests on Thursday, the fraternity's executive director, Doug Lanpher, issued a statement condemning violence by its members.

“Our number one priority is that our chapters foster safe environments, and through our investigation, we found that the student members made choices inconsistent with the policies and values of Delta Kappa Epsilon,” he said.

“DKE does not tolerate this kind of behavior in the fraternity and holds its chapters and members accountable for the choices they make.”