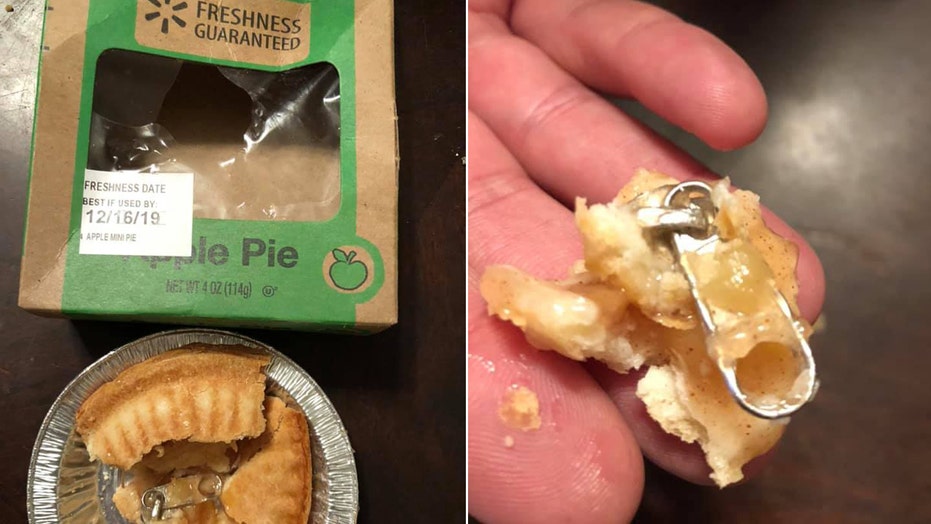 A woman from upstate New York is claiming that her daughter choked on a zipper that was found inside an apple pie purchased at an area Walmart.

Kelly Carpenter Marek took to Facebook over the weekend to share several photos of what appeared to be a zipper pull found inside the baked good.

IOWA MAN, 18, SAVED FROM TRAPPED CAR IN FREEZING WATERS THANKS TO SIRI: REPORT

“So I went to the north Utica Walmart and bought some pies and as my daughter was eating one she started choking and we found out there was a zipper in the apple pie,” her post read.

Marek told WFRG-FM radio that as soon as she noticed her 10-year-old choking, she began performing the Heimlich Maneuver.

“Good thing I was trained in that instead of panicking,” she said.

Marek alleged that she spoke to a store supervisor who told her that “they were going to take the pies off the shelves, call the main office and then call me right back” but she said she never was contacted again.

“We don't want anyone else to get hurt.”

Walmart’s corporate offices issued the following statement to Fox News in an email Friday: "We are committed to providing our customers the quality products they expect, and we take this seriously. We’re looking into this with the manufacturer and in the meantime, out of an abundance of caution, have removed the product from the shelves at this store.”

An update from the station reported that Marek was eventually contacted by a third party, Table Talk Pies in Worcester, Mass.

They contacted me this morning and I’m shipping the pie with the zipper to them for further investigation," she told WFRG.

Marek did not respond to Fox News’ request for comment.