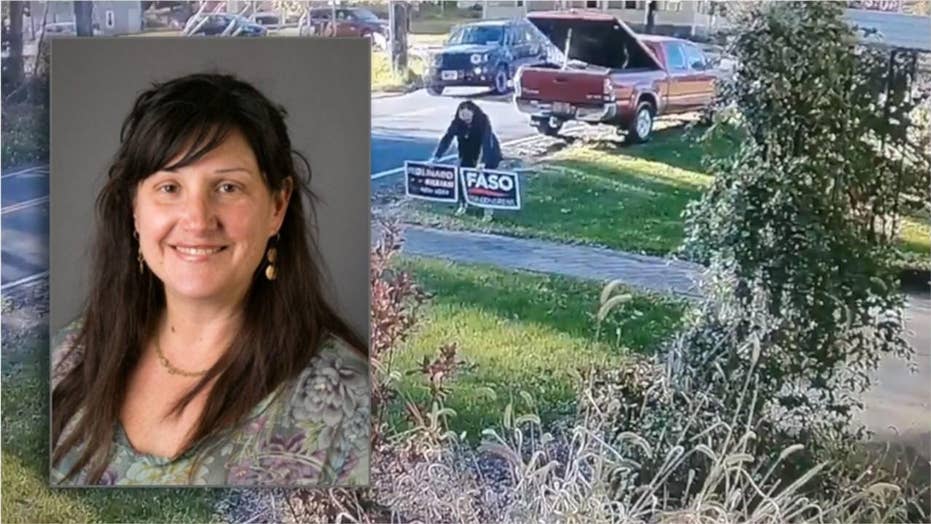 Laura Ebert, an economics professor at the State University of New York at New Paltz, was charged with misdemeanor larceny for stealing signs supporting Republican candidates.

A New York professor has been arrested after she was caught on camera ripping out Republican yard signs from someone else's lawn.

Laura Ebert, an economics professor at the State University of New York (SUNY) at New Paltz, was charged with misdemeanor larceny for stealing signs supporting Republican candidates John Faso, and Marc Molinaro, at the home of Patrick and Lisa McGovern in Rosendale, eight miles from the school.

Patrick McGovern noticed the signs were missing so he reviewed the footage, which showed the public university professor pulling up to the signs, hopping out of her truck, pulling the signs out of the ground, and putting them in the bed of her truck on Oct. 30.

"It's crazy in our area lately. It's never been like this," Lisa, a registered independent, told Fox News. "People are getting over-emotional."

McGovern said the incident was especially "frightening" because it was so close to their home, but she said it was amusing to find out it was a local professor.

"I kind of thought it was funny in a way, because of the times, you hear about stories of the professors being very liberal and not allowing people with conservative or Republican views to speak...almost like trying to shut down my voice, which seems antithetical to what a professor should be doing because we should all have a voice," McGovern said.

Ebert said she was caught in a moment of weakness and high emotion and meant no harm to McGovern nor did she know she lived there.

"I have family I love that support Trump, so I was after the sign, not the person," Ebert told Campus Reform. "I have apologized and feel bad, but clearly the GOP is putting a big deal [of] spin on this. Many signs have been taken and disfigured, which, while no excuse for my bad behavior, doesn't warrant the death threats I have received...Nor the smear campaign after me..."

According to the police report, Ebert is set to appear in court November 13, and it is unclear whether she stole more signs in other areas.

There are several negative reviews on RateMyProfessor.com about how "unorganized" and "all over the place" Ebert is. Many said she was their worst professor they'd taken at SUNY New Paltz, but many noted she is a nice person.

"I'm sure she's not a bad person but she just acted irrationally," McGovern said. "I think it's actually kind of a representation of what's happening in our country right now, that people on both sides are dug in on their side and doing things without thinking."

A group of 20 or so protesters gathered Sunday on the opposite sidewalk of the "American flag appreciation walk" in New Paltz, New York. (John Metz)

Her incident came weeks after community members in the same town rallied around an American flag mural targeted by protesters who are now trying to boycott the pizza shop responsible for putting it up and was vandalized Monday night.

"My husband said I'm not allowed to buy pizza anywhere else," McGovern joked. "I felt like it was a little over-the-top that people were saying it is offensive. It's a symbol of our country. It's non-political and for people in a small town trying to get a small business shut down is a little outrageous. People should be supporting small business, not trying to get them shut down."

The university did not immediately respond to request for comment.