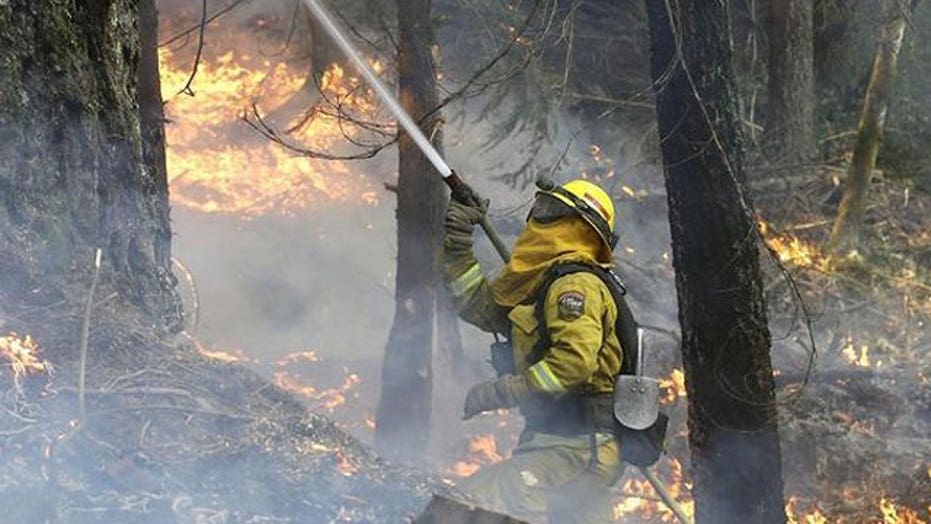 Wildfire burns out of control in central California

PLACERVILLE, Calif. – Nearly 2,000 firefighters were added Tuesday to battle a massive Northern California wildfire that threatened thousands of homes and fouled the air 50 miles away in Reno, Nevada, which was blanketed by smoke.

The King Fire east of Sacramento has scorched about 139 square miles. Fire crews increased containment to 35 percent after several days of more favorable weather but with dryer air and increasing winds in the forecast, reinforcements were brought in pushing the number of firefighters on the scene to 7,400.

Wind gusts up to 35 mph, combined with low humidity, could stoke the flames and send embers flying ahead of the blaze.

"We're not sitting back and waiting. We have crews trying to get those containment lines strengthened," state fire Battalion Chief Scott McLean said.

The wildfire, which authorities believe was set on Sept. 13, has destroyed 12 homes and 57 outbuildings. It continues to threaten about 21,000 structures, more than half of them homes.

There was some good news, as evacuated homeowners in the White Meadows area near Pollock Pines were allowed to return Tuesday, El Dorado Sheriff John D'Agostini said.

While firefighters made progress during the weekend with cooler and damper conditions, there were fears Tuesday about the potential for winds similar to when the blaze doubled in size a week ago.

"We are just as concerned as were last week, but with the increased personnel we are optimistic that we can reduce any type of wind effect," state fire Battalion Chief Chris Christopherson said. "This is the highest priority fire in the nation. We're hopeful that we can combat it."

About 2,700 people remain under evacuation orders, fire officials said. The fire also continued to threaten a key University of California, Berkeley research station that is home to scores of experiments on trees, plants and other wildlife.

The National Weather Service issued a "dense smoke advisory" for Reno and around Lake Tahoe, which is about 15 miles from the fire.

The air quality index was rated "hazardous" for the city of Auburn northeast of Sacramento, as well as the Roseville and Rockville areas.

The man charged with starting the fire, Wayne Allen Huntsman, 37, has pleaded not guilty to arson. He remains in the El Dorado County jail on $10 million bail.