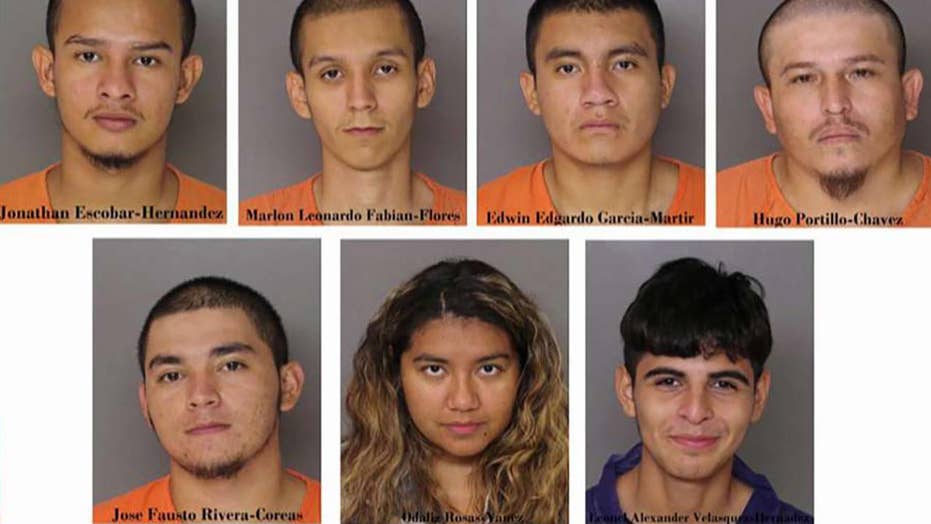 Six of the seven people charged in the stabbing death of a man in Maryland in July have been identified by federal officials as being part of the MS-13 gang and in the country illegally, according to U.S. Immigration and Customs Enforcement.

The Baltimore County Police Department announced Tuesday that seven suspects, including a 16-year-old charged as an adult, were charged with killing 21-year-old Daniel Alejandro Alvarado Cuellar.

Cuellar's body was discovered July 31 in the grass outside an apartment building in the Townson area and had "multiple sharp-force injuries," officials said in a news release.

Police said that Cuellar was the intended victim of a planned gang-related murder, but said a motive for the slaying remained under investigation.

“We know this group of individuals was conducting surveillance on him, they were watching him, following him. We know they watched as he left the laundromat and went back across the street to the apartment complex and that is where some of those individuals accosted him,” Baltimore County Police Officer Jennifer Peach told Fox 45. “We know they used knives and multiple people stabbed him multiple times.”

The seven suspects were all charged with first-degree murder, according to police.

An ICE spokeswoman told Fox News on Sunday that the agency has issued six immigration detainers. The federal agency said that detainers were lodged once the individuals entered local law enforcement custody on murder charges.

Of the seven suspects, six are in the U.S. illegally, the ICE spokeswoman added. Of the six illegal immigrant suspects, who were not named, five are Salvadoran and one is Mexican, ICE said.

PROSECUTORS ACCUSE MS-13 OF 7 'MEDIEVAL-STYLE' SLAYINGS, INCLUDING CUTTING HEART OUT OF RIVAL

All of the six illegal immigrants were identified as MS-13 members in an ICE gang database, the ICE spokeswoman said.

Investigators believe that Cuellar's killing was due to a war between two rival Latino street gangs, the 18th Street and MS-13, according to the Baltimore Sun.

President Trump addresses the arrest of gang members for brutal murders during rally; Trace Gallagher has the details.

The 21-year-old had been seen making a hand gesture that was believed to be “indicative of an affiliation with the 18th Street,” detectives wrote in charging documents obtained by the Sun.

The seven suspects arrested in connection with Cuellar's slaying remain held without bail in the Baltimore County Detention Center, according to police. All seven could face a life sentence in prison if they are convicted, officials said, while adding that it's possible that others may also face charges in connection to the murder.

MS-13 is active in Maryland, but is usually focused in the suburbs around Washington D.C. Earlier this year, a 14-year-old girl was killed with a machete and a baseball bat when MS-13 gang members turned on an associate "in extremely violent behavior."

That slaying came only months after authorities arrested five MS-13 gang members for the murder of another MS-13 member, Jacson Chicas, 16. He was stabbed more than 100 times and then dumped on the side of a Virginia road and set on fire.

"We've seen a rise in gang activity here this spring. There have been a few homicides in the region, as you've seen," Jay Lanham, director of the Northern Virginia Gang Task Force, told Fox 5 in June. "Last year, we saw the gangs, especially MS-13, laying low. We arrested a lot of the program and clique leaders so their leadership was lacking."

Lanham said at the time that the 18th Street Gang is MS-13's top rival.

MS-13, also known as La Mara Salvatrucha, recruits young teenagers from El Salvador and Honduras, though many gang members were born in the U.S. The gang has been blamed for dozens of killings since January 2016 across a wide swath of New York's Long Island, the Los Angeles area, and the D.C suburbs.

The notorious MS-13 gang has been singled out by President Trump for its brutality, which has led to a series of crackdowns by law enforcement on the federal and local levels.