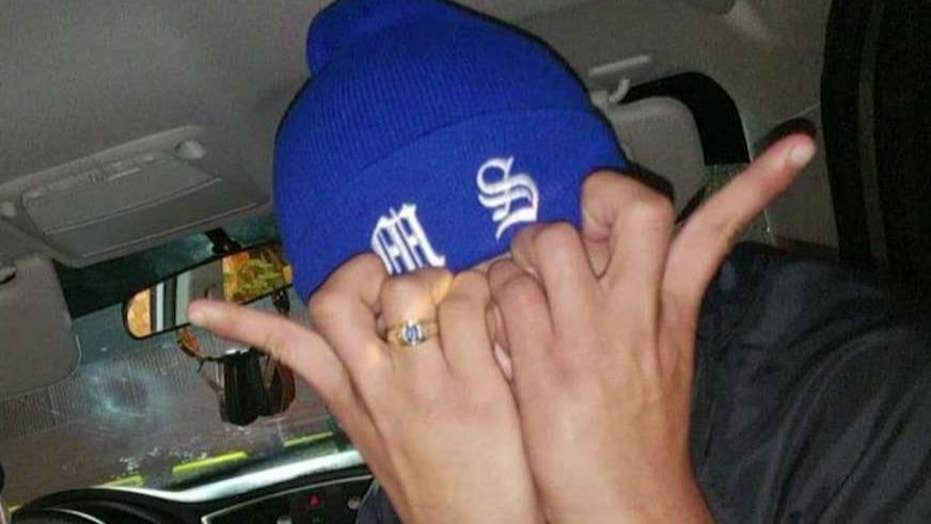 Federal authorities in Los Angeles charge 22 MS-13 members with seven medieval-style slayings, including cutting the heart out of a rival; Trace Gallagher reports.

Los Angeles MS-13 gang members were charged Tuesday with the “medieval-style” slayings of seven people, including a rival gang member who had his heart cut out of his chest.

The federal RICO indictment with the murder charges targets an MS-13 group in the San Fernando Valley and spells out other acts of violence prosecutors say were committed on behalf of the notorious transnational gang, which President Trump has vilified for its wanton violence in New York and other places.

In announcing the indictment against 22 individuals, Los Angeles U.S. Attorney Nick Hanna credited a collaborative law enforcement effort with solving several murder cases and dealing “a severe blow to members of the gang who engaged in acts of brutality not seen in the region for over 20 years."

MS-13 MEMBERS HIDING IN ABANDONED HOMES IN NEW YORK AFTER BEING CHASED OUT OF THE WOODS, POLICE SAY

"Taking violent offenders off the street should send a message to MS-13 members and their associates that medieval-style violence and senseless murder will not be tolerated in Los Angeles," said Paul Delacourt, assistant director in charge of the FBI's Los Angeles field office.

The victim whose heart was cut out was identified in the indictment as “J.S.” Prosecutors said MS-13 suspected he'd crossed out MS-13 graffiti.

On March 6, 2017, he was driven to Angeles National Forest, where six MS-13 gang members attacked him with a machete, killing him, the indictment claimed.

MS-13 MEMBER GETS 55 YEARS IN PRISON IN QUADRUPLE SLAYING

“The victim was dismembered and his body parts were thrown into a canyon after one of the defendants allegedly cut the heart out of the victim’s body,” a news release from Hanna’s office said.

The other six MS-13 victims were  rival gang members, perceived snitches and a homeless man who was temporarily living in a park the gang considered its turf, Fox 11 Los Angeles reported.

Four of the killings took place in Angeles National Forest. All the killings were committed with machetes, bats and knives, according to the indictment.

Three individuals named in the indictment were arrested in the past few days in the Los Angeles area, and a fourth was arrested over the weekend in Oakland, according to the Patch news outlet.

The other 18 defendants have been arrested over the past year.