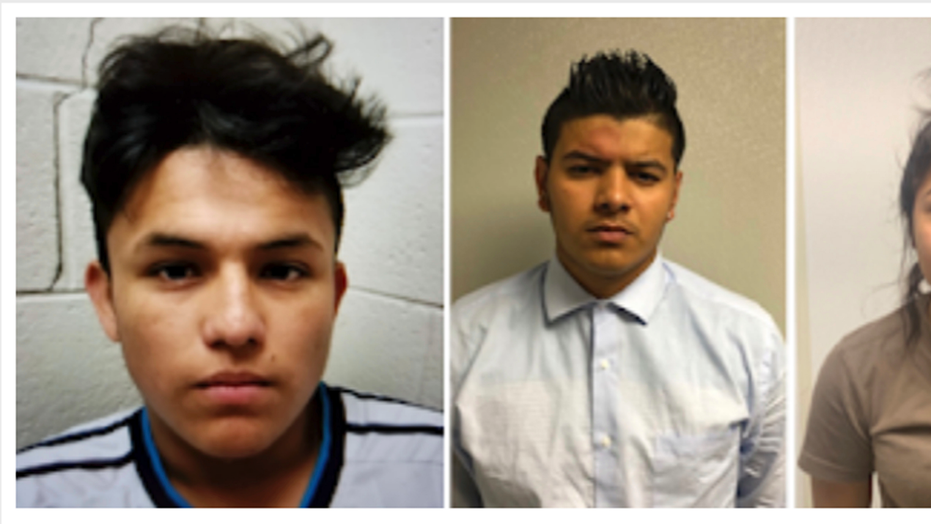 A 14-year-old girl was killed with a machete and a baseball bat when MS-13 gang members turned on an associate "in extremely violent behavior,” Maryland police said.

The body of Ariana Funes-Diaz was found in a creek in Prince George’s County on Wednesday -- a month after she was reported missing.

Police on Thursday charged Josue Fuentes-Ponce, 16, of Bladensburg, Md.; Joel Escobar, 17, of Northeast Washington; and Cynthia Hernandez-Nucamendi, 14, of Lothian, Md., with the murder. All were charged as adults.

Mugshots for, from left to right, Josue Fuentes-Ponce, 16, Joel Escobar, 17, and Cynthia Hernandez-Nucamendi, 14. The teens were arrested and charged as adults with murder after a missing 14-year-old girl was found dead in a creek on  Wednesday (Prince George's County Police Department via AP)

Funes-Diaz was killed to keep her from becoming a snitch, police said.

She and the three murder suspects on April 17 robbed a man who was snatched off the street in Washington and taken to an abandoned house, police said.

The next day, Funes-Diaz was driven to a wooded area and killed, Reilly said.

“This is not two gangs warring with each other,” Reilly said. “This is a gang that turned on itself, turned on an associate in extremely violent behavior.”

The major said a fourth murder suspect was being sought. That person had also participated in the robbery.

Officers assigned to the gang unit developed information that led to a search for Funes-Diaz’s body.

The slaying comes only months after authorities arrested five MS-13 gang members for the murder of another MS-13 member, Jacson Chicas, 16. He was stabbed more than 100 times and then dumped on the side of a Virginia road and set on fire.