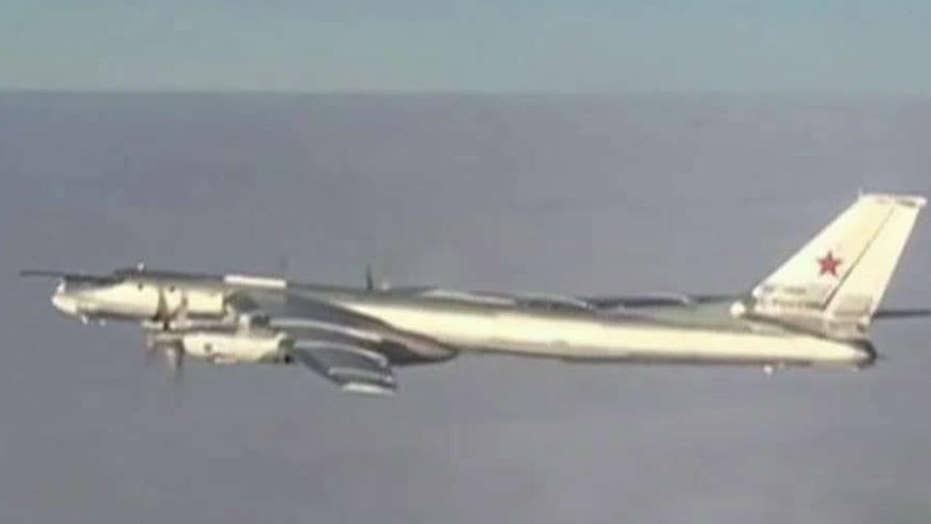 Wednesday night a pair of Russian spy planes Ilyushin IL-38s flew near the Aleutian Islands in the Bering Sea staying in the U.S. Air Defense Zone for a few hours before departing.

Two U.S. Air Force F-22 fighter jets intercepted the bombers, a NORAD spokesman told Fox News without elaborating. The spokesman would not say how close the Russian bombers came to the Alaskan coast or Canada. CF-18 Hornets also participated in the intercept.

The Russian jets in both incidents remained in international airspace. It was not immediately clear how close they came to mainland Alaska.

Russia now has flown bombers or spy planes near Alaska on four consecutive nights this week, the first time since President Trump took office that Russia has flown this close to the United States. The U.S. Air Force scrambled fighter jets in some of these instances.

Pentagon officials said they believed the Russians were testing the U.S. Air Force’s response to their bomber flights.

Tuesday night, the only plane launched from Elmendorf Air Force Base in Alaska was an E-3 Sentry, an airborne early warning plane known as AWACS, to make sure no other Russian planes were inbound.

The Russian action comes less than a week after Secretary of State Rex Tillerson and President Trump said U.S.-Russian relations had reached a "low point."

The U.S. military also conducts flights near Russia, but in most cases uses its own reconnaissance aircraft like the U.S. Air Force Boeing RC-135 and not long-range bombers, according to officials.

In the past, the U.S. Navy often has performed reconnaissance below the sea near Russia using Los Angeles or Virginia-class attack submarines, but these operations are classified and not disclosed publicly.