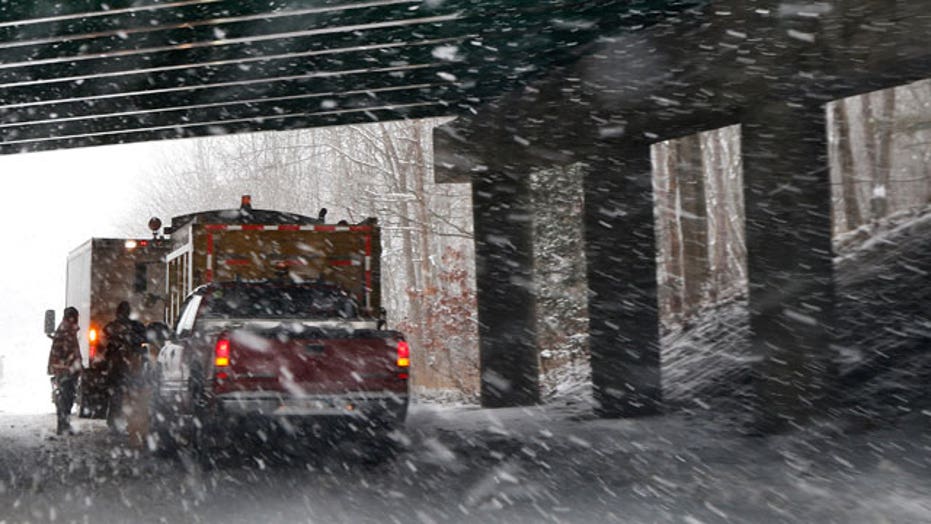 A powerful winter storm system that affected much of the country dumped up to 2 feet of snow in areas near Boston, shut down major highways in New York and Pennsylvania and forced U.S. airlines to cancel thousands of flights nationwide.

There is a combination of storms that span from the southern Appalachians into New England and are expected to last into Friday, with the heaviest snow expected to fall on central New York to the Massachusetts coast, the National Weather Service said. The next arctic surge will arrive into the Northern Plains on Saturday. Besides the high accumulation, snow is accompanied by strong winds and dangerously cold temperatures.

U.S. airlines canceled more than 2,300 flights Thursday because of the snowfall and low visibility. By Friday morning, about 1,600 flights were canceled nationwide, according to the aviation tracking website FlightAware.com. John F. Kennedy International Airport in New York closed early because of the snow but was expected to reopen at 8:30 a.m.

Amtrak planned to run trains on all of its Northeast lines on Friday but operate on a modified schedule, spokeswoman Christina Leeds said. Commuter trains Metro-North Railroad, which runs trains between New York City and suburban Connecticut, Long Island and New York's Hudson Valley, the Long Island Rail Road and New Jersey Transit were operating on weekend schedules. Chains were placed on New York City buses so they would not get stuck in drifts.

The storm -- which brought plummeting temperatures that reached 8 degrees below zero in Burlington, Vt., early Friday with a wind chill of 29 below zero -- dumped 23 inches of snow in Boxford, Mass., by early Friday and 18 inches in parts of western New York near Rochester. Ten inches of snow fell in Lakewood, N.J., and up to 7 inches fell in New York City.

The snowstorm worked its way east from the Midwest, where it dropped up to a foot of snow on Michigan and more than a foot in parts of Illinois, prompting the cancellation Thursday of hundreds of flights at both Chicago airports. Nearly 17 inches of snow fell in some of Chicago's northern suburbs, and more than 12 inches of snow was recorded at Midway International Airport.

As the storm approached, a worker at a suburban Philadelphia salt storage facility was killed when a 100-foot-tall pile of road salt fell and crushed him. Falls Township police said the man was trapped while operating a backhoe. There was no word on what may have caused the accident.

Forecasters warned that gusts of up to 30 miles per hour could bring wind chills to minus 25 degrees, cold enough to cause frostbite in about 30 minutes or less. The weather service said people should dress warmly to avoid hypothermia and cover all exposed skin.

New York Gov. Andrew Cuomo ordered three major highways in his state, stretching from Long Island to Albany, closed overnight. The Thruway between Albany and the Bronx reopened for passenger vehicles at 5 a.m. Friday and was scheduled to reopen to commercial vehicles at 8 a.m. The Long Island Expressway and Interstate 84 between the Pennsylvania and Connecticut borders were scheduled to reopen at 8 a.m. Southbound Interstate 95 closed in Philadelphia because of a jackknifed tractor-trailer.

The heavy weather began rolling in just a day after New York Mayor Bill de Blasio was sworn in to lead the nation's largest city and a few days before Boston Mayor Thomas Menino ends 20 years in office on Monday.

De Blasio, who as public advocate in 2010 criticized his predecessor Mayor Michael Bloomberg for his handling of a large snowstorm, dispatched hundreds of plows and salt spreaders on the streets as soon as the snow started falling Thursday night. Forecasters said that while only 5 inches of snow had fallen in Central Park by early Friday, up to 8 inches were still expected in the city.