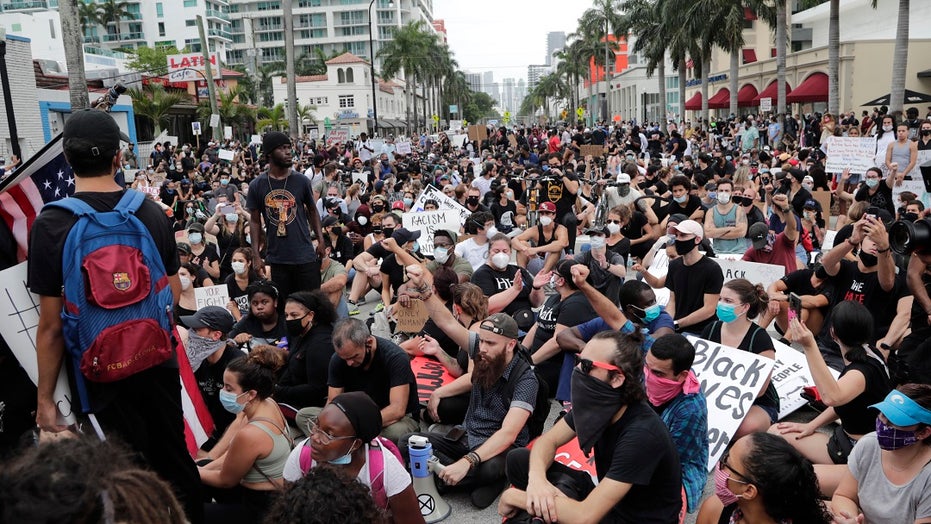 The Miami Police Department suggested nonessential businesses close ahead of a planned protest against police brutality in the downtown area Friday in anticipation of interruptions to business operations and heavy traffic.

"The expected attendance is unknown, but there may be significant interruptions to vehicular and pedestrian traffic and business operations," a police statement posted to Twitter read. "We suggest that non-essential businesses close no later than 2 p.m. this afternoon."

A large crowd began to assemble near the Torch of Friendship on busy Biscayne Boulevard around 3 p.m., with law enforcement standing nearby. They marched through downtown and Interstate 95 before getting into a standoff with Florida Highway Patrol troopers in riot gear, according to local media outlets. A portion of the freeway was closed in both directions.

Before marching onto the freeway, demonstrators walked peacefully to the Miami-Dade County Courthouse chanting "defund the police," a sentiment being embraced by some cities in the wake of George Floyd's death while in police custody last month, WPLG-TV reported.

Like other cities across the nation, Miami has seen large gatherings to protest racial injustice and the death of Floyd. Clashes between the police and protesters have escalated at times, resulting in violent confrontations.

Seven people were arrested during a downtown protest this week after they allegedly defaced statues of Christopher Columbus and Ponce de Leon.

The Miami chapter of Black Lives Matters were organizing Friday's demonstration. Two more gatherings were planned in the area through the weekend.