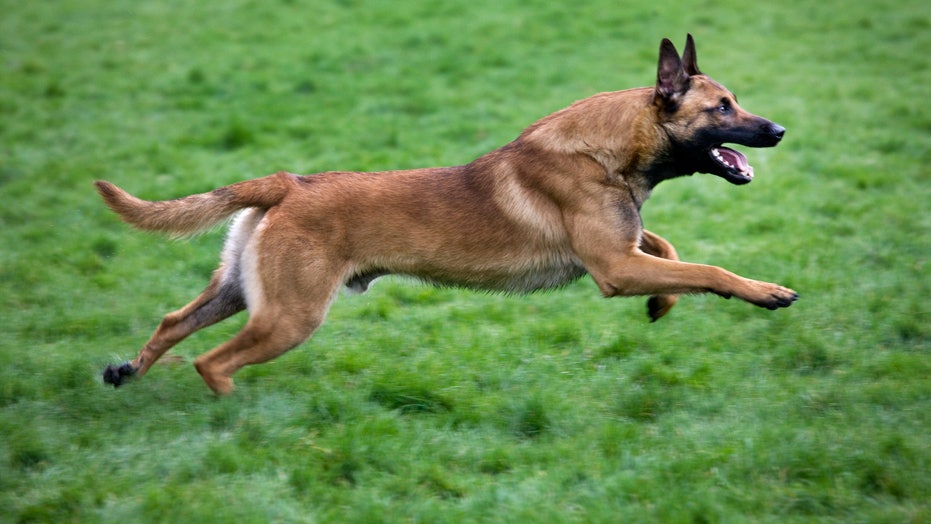 A Massachusetts teen died Thursday night after police say he was mauled to death by a “pack of dogs.”

Ryan Hazel, 14, was pronounced dead on the scene after suffering “traumatic injuries to various areas of his body” from an apparent dog attack, Bristol County District Attorney Thomas Quinn said at a press conference on Friday.

According to authorities, Ryan was dropped off by his grandmother at 2477 Maple Swamp Rd. in Dighton, Mass., some 46 miles south of Boston, around 6 p.m.

Quinn said that the young teen had an “arrangement” with the property owner, who was later identified as 49-year-old Scott Dunmore, to tend to his animals when he was out of town.

“He was going there to take care of several animals on the property while the homeowner was in Boston,” he said. “The victim took care of the homeowners dogs and other animals on a regular basis.”

Belgian Shepherd Dog / Malinois (Canis lupus familiaris) running in field, Belgium. This is one of the dogs that was in the yard when 14-year-old Ryan Hazel died from an apparent dog attack. (Photo by: Arterra/UIG via Getty Images)

Ryan’s grandmother told police that she would normally wait for him to finish, a process that took between 30 and 45 minutes, but this time she grew concerned when the teen hadn’t returned after an hour.

She contacted Ryan’s parents who were in New York at the time and they contacted a neighbor to check on the boy.

When the neighbor arrived on the property, which was described as a large lot with several buildings on it, he saw the victim lying in the yard surrounded by dogs, suffering from “traumatic injuries to various areas of his body,” Quinn said.

The neighbor attempted to perform CPR but Ryan was pronounced dead once first responders arrived on the scene.

TOURIST, 24, DOES FROM RABIES AFTER HELPING STRAY IN THE PHILIPPINES

Quinn declined to comment further on the victim’s condition or the manner in which the dogs were found. He did say that dogs did not appear to be “malnourished.”

There were four loose dogs in the yard, a Belgian Malinois and several Dutch Shepherds. Seven other dogs were caged at the time of the attack.

The eleven dogs were taken into “custody” by local animal control where they will be quarantined for 10 days as the law requires.

“It does not appear that any foul play is suspected at this time. This was clearly a terrible tragedy for the victim his family and his friends and the town. My heart goes out to all of them,” Quinn said.

He added that the homeowner has cooperated with authorities but that his dogs were not licensed in the county. The majority of the dogs belonged to the homeowner but he was also watching several dogs that did not belong to him.

Police said there have never been any calls about the property in the past other than a reported house fire in February.