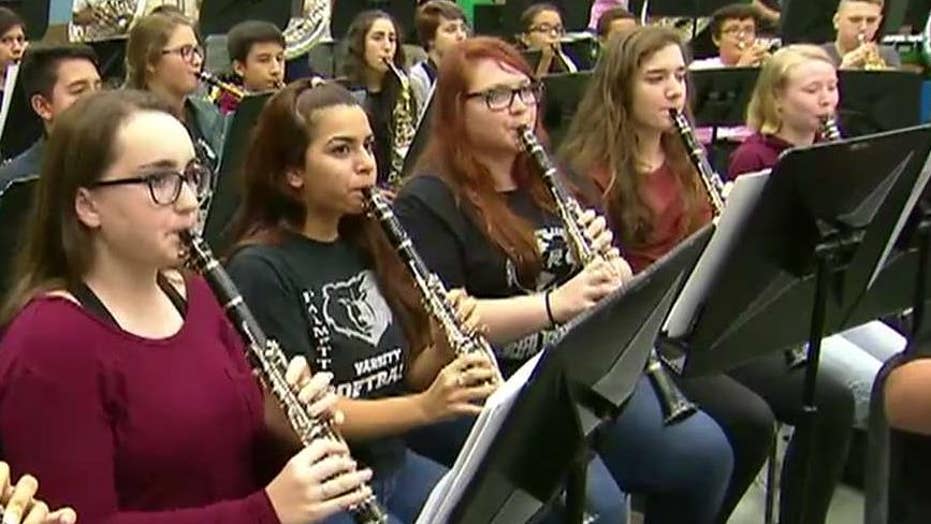 And with that, the Palmetto Ridge High School marching band from Naples, Florida, blares into its first number, which the musicians plan to perform for Donald Trump at the inauguration parade Jan 20.

In fact, the Marching Bears have been ecstatic since the inaugural invitation came in the mail last month.

"When Ms. [Band Director Annabelle] Sarmiento first announced it,” said senior Color Guard member Krista Cosio, "we got really excited. There was clapping, cheering, because this was a big deal. Not many bands get to do this, so it's a big deal."

The mood at Palmetto Ridge is in contrast to some other bands and performers who are refusing to attend for political reasons. Not one Washington, D.C., high school marching band will be in Trump’s Inauguration Day parade, the first time that has happened in six inaugurations. There are also online petitions gathering signatures to urge some marching bands to drop out, like the University of Tennessee-Knoxville’s and the Talladega College Band in Alabama.

"I don't look at it as a political issue,” said Palmetto Ridge senior drum major Marcos Atiles. “I look at it as a way to play for the president, whoever it is. I just look at it as an honor to be playing for someone so high up. The chief executive of the United States."

But the Marching Bears can’t go to the parade if they can’t raise the money to get there. The 230 boys and girls come from mostly working-class families who don’t have the money. In fact, more than half the members are in the free lunch program.

The Palmetto Ridge principal and band director estimate that, after travel, hotels and meals are factored in, they’ll need $135,000 for the once-in-a-lifetime trip.

So they’ve been drumming for dollars all over town, taking small cash donations from people who stop their cars to give. They also set up a GoFundMe account online. And when they’re not practicing at school, they’re trumpeting their Trump inauguration invitation to anyone who will listen.

And, they hope, contribute a check.

"I just hope people understand it's not political, it's more about the kids going to the trip," said senior sousaphone player David Tanis.