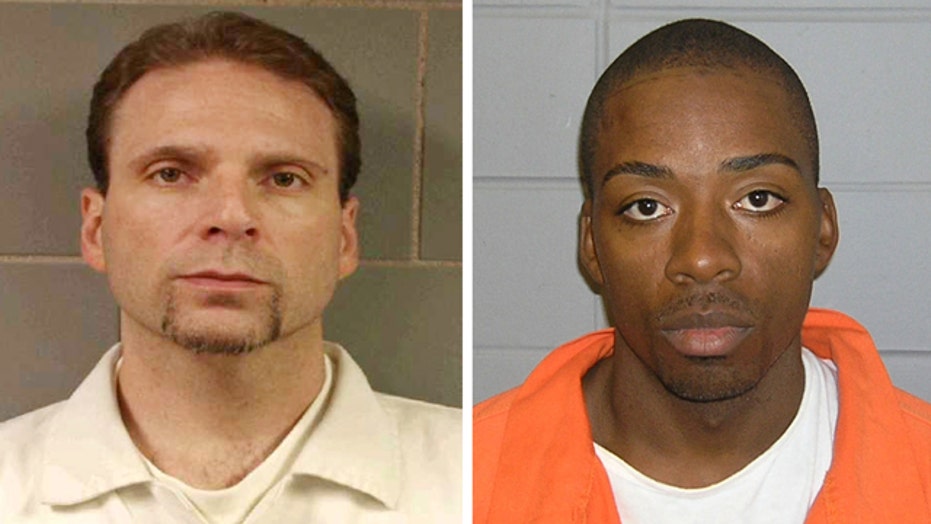 CHICAGO – A massive manhunt is under way with federal arrest warrants issued for two bank robbers who pulled off a daring escape from downtown Chicago's high-rise jail Tuesday by apparently squeezing through a narrow window and scaling down about 20 stories using a makeshift rope, MyFoxChicago.com reported.

Police helicopters and canine units swarmed the area. They were searching for Joseph "Jose" Banks and Kenneth Conley who were unaccounted for three hours earlier during a 5 a.m. headcount. It's unclear if the men were still inside the 27-story facility at that time, U.S. Marshal's Service spokeswoman Belkis Cantor said.

It appeared to illustrate a meticulously planned escape -- which came a week after Banks made a courtroom vow of retribution. Both men are facing hefty prison sentences, and the FBI said they should be considered armed and dangerous.

SWAT teams stormed at least one home in Tinley Park, a suburb south of the city. Although neither man was found, evidence suggested that both had been at the home just hours earlier, according to the FBI.

"At one point, they went to the garage and it looked like they had a battering ram to the garage door and kinda busted in the garage and nothing was there but a couple minutes later, they went and got the police dogs and the bloodhounds or whatever and they were doing their thing," Jon Windish, a neighbor said.

Jim Shaughnessy says he has known Ken Conley for years.

"The family is pissed, they're ashamed, I would be too, Kenny's just you know, Kenny's Kenny. He's crazy, the family's sick of it, enough is enough," said Shaughnessy.

Now there's a sweeping manhunt underway, and Shaughnessy worries it will end badly.
"If this plans well thought out, I don't know, it's not gonna end well for Kenny," says Shaughnessy. "I don't think he's gonna go quietly, that's for damn sure."

Some schools went on lockdown after being inundated with calls from nervous parents. Mike Byrne, a superintendent in Tinley Park, said "our parents are so emotionally charged right now" because of the school shootings in Connecticut.

Hours after the escape, a rope possibly made of bed sheets could be seen dangling down the side of the Metropolitan Correctional Center. At least 200 feet long and knotted about every 6 feet, the rope was hanging from a window that was 6 feet tall but only 6 inches in diameter.

The facility is one of the only skyscraper lockups in the world, and experts say its triangular shape was meant to make it easier to guard, theoretically reducing blind spots for guards. The only other escape from the nearly 40-year-old facility occurred in the mid-1980s, Cantor said.

Exactly when Banks, 37, and Conley, 38, escaped remains unclear. Shop owners across the street from the wall the men scaled said police suddenly flooded into the area around 8:30 a.m., hours after they missed a headcount. Police initially said the men escaped sometime between 5 a.m. and 8:45 a.m.

Both men were wearing orange jumpsuits, but police believe they may have quickly changed into white T-shirts, gray sweat pants and white gym shoes. The FBI believes both men were in Tinley Park, a heavily wooded area about 25 miles south of Chicago. Authorities were scouring a local forest preserve in the afternoon.

Banks, known as the Second-Hand Bandit because he wore used clothes during his heists, was convicted last week of robbing two banks and attempting to rob two others. Authorities say he stole almost $600,000, and most of that still is missing.

During trial, he had to be restrained because he threatened to walk out of the courtroom. He acted as his own attorney and verbally sparred with the prosecutor, at times arguing that that U.S. law didn't apply to him because he was a sovereign citizen of a group that was above state and federal law.

After he was convicted by U.S. District Judge Rebecca Pallmeyer, he said he would "be seeking retribution as well as damages," the Chicago Sun-Times and Chicago Tribune reported.

When the judge asked how long he needed to submit a filing, Banks replied: "No motion will be filed, but you'll hear from me."