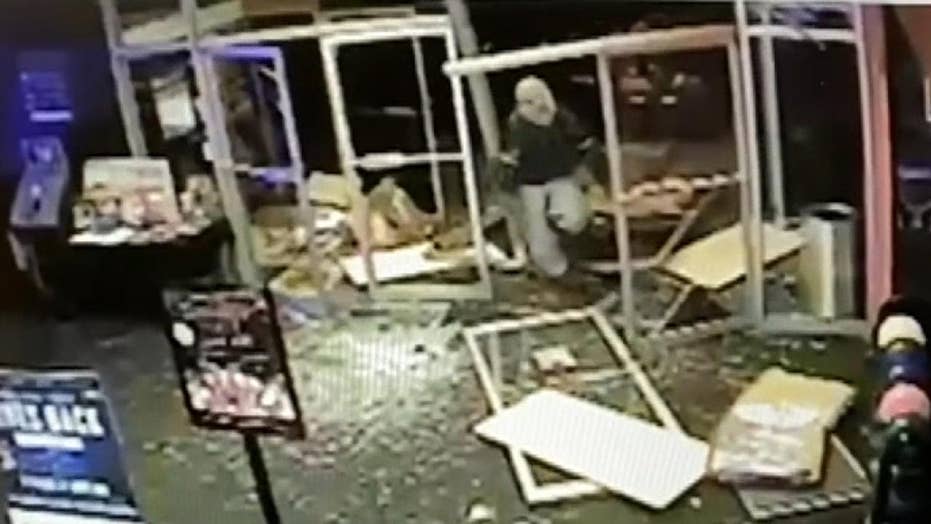 Police search for suspect who kidnapped a woman, stole her car and slammed it into a bowling alley

Raw video: Officials searching for suspect who was seen on surveillance cameras after kidnapping a woman, stealing her car and plowing a stolen vehicle into a bowling alley in Waldorf, Maryland.

The kidnapping suspect seen on video crashing into a Maryland bowling alley in a stolen car has been arrested, authorities said.

Deputies said Brown was the person who backed a Toyota into the front doors of the Waldorf AMF bowling alley in Waldorf early Thursday, a scene caught on surveillance video.

The car belonged to a woman who told deputies Brown had kidnapped her Wednesday, forced her to withdraw money from ATMs and then dropped her off in another town after an hours-long ordeal, deputies said.

A passerby found her at 3:37 a.m. barefoot and with her hands bound.

Deputies said the woman told them that Brown abducted her when she walked in on him burglarizing her home.

MIAMI MAN, 22, ACCUSED OF KIDNAPPING UBER DRIVER FOR FREE RIDE: 'DRIVE OR I WILL SHOOT YOU'

“Detectives worked closely with the victim throughout the day and night,” the Charles County Sheriff’s Office said Saturday.

“Through their extensive investigation, detectives were able to identify the suspect and link him to the kidnapping as well as the burglary of the Waldorf AMF bowling alley.”

Brown was jailed without bond on various charges.