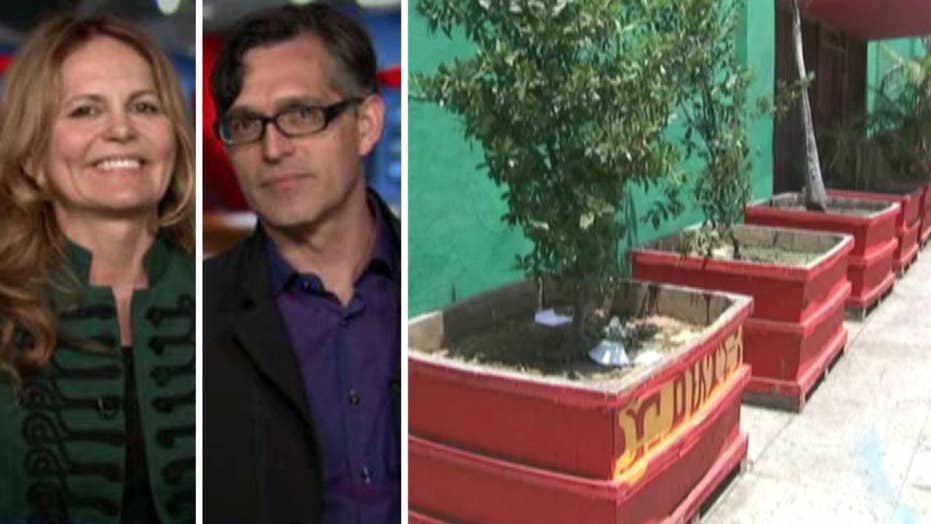 As Los Angeles homeless crisis gets worse, business owners take matters into their own hands

Two Los Angeles business owners who say they are losing business because of tents near their building set up 140 planter boxes to keep the sidewalks clear.

Some Los Angeles business owners are taking matters into their own hands amid the city's homelessness crisis.

According to the L.A. Times, there are about 59,000 homeless people in the county, with the population in the city of Los Angeles growing 16 percent this year to more than 36,000 and the majority living on city streets.

Peter Mozgo and his wife, attorney Maria Janossy, told Fox & Friends on Friday that they're losing potential customers because more and more people are sleeping on the sidewalks around their business, the Hungarian Cultural Alliance. In response, they set up about 140 large planter boxes, hoping it would force homeless people to set up their tents elsewhere.

"A lot of our Hungarian expats were afraid to even drive into the streets. We decided after knocking on so many doors to try to get this resolved with the city, that we would just take matters into our hands," Janossy told Ainsley Earhardt.

A Los Angeles business placed 140 planter boxes around their building in response to tents being set up by homeless people.

Mozgo said he observed many other businesses putting up their own planter boxes and other obstructions, as they complained that the city is failing to follow through on addressing the issues.

In a statement last month, Mayor Eric Garcetti touted the work the city has done to restrain the pace of homelessness compared to other California cities, but said "we must do better" and that he takes "full responsibility for our response to this crisis."

Janossy said she and her husband emigrated to the United States and they "don't understand how a rich country like the U.S., and especially California, cannot take care of this problem."

Mozgo said the city must take "immediate" action and characterized Garcetti's statements as all talk with little action.

"You see the street is getting more and more trash. I always hear from Eric Garcetti 'we're gonna take care of it, we're going to remove the trash and keep our city clean.' But not very much is happening, there is no improvement," he said, adding that the city does not enforce laws that require tents to be removed each morning.