Los Angeles residents are petitioning to recall Mayor Eric Garcetti over his handling of the homelessness crisis in the city, with one of the leading campaigners saying officials are leaving people “on the street to die.”

One of the key proponents of the recall, Alexandra Datig, appeared Wednesday on “Tucker Carlson Tonight” to urge Los Angeles residents to get rid of the mayor over his incompetence in handling the skyrocketing homelessness.

“I think we are living in third world conditions that are a threat to public health here in Los Angeles, and we have a mayor who is completely ignorant of that and he is an abysmal failure,” Datig said.

“I think we are living in third world conditions that are a threat to public health here in Los Angeles, and we have a mayor who is completely ignorant of that and he is an abysmal failure.”

“We have this position in the city of Los Angeles where our leaders seem to think that it's okay to leave people on the street to die, just whistling past the graveyard. We have had over 3600 people dying on the streets of Los Angeles in the past five years,” she added, noting that there was a 75 percent increase in homelessness in the past six years.

Garcetti, the two-term Democrat, spoke Wednesday about his city’s problems amid the campaign to recall him after figures released earlier this month showed a substantial increase in homelessness despite millions of dollars being applied to the problem.

The city saw a 16 percent jump in homeless people -- to 36,300 -- over last year, according to an annual point-in-time count conducted by Los Angeles County earlier this year.

“I feel very strongly about the mission that I'm on,” Garcetti said. “We are housing more homeless people than ever before and ... we are going to redouble our efforts.” 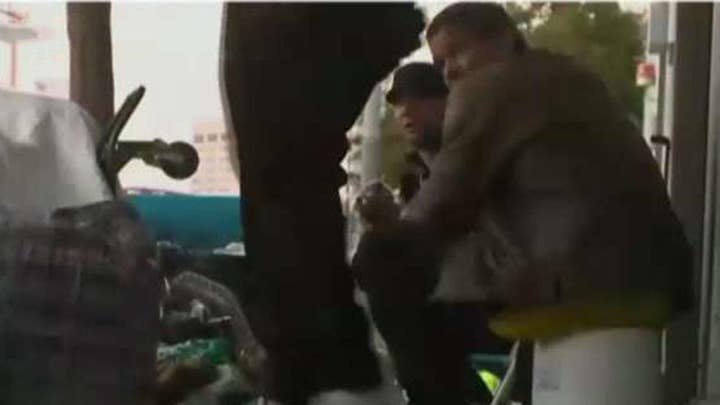 But Datig says the mayor already had enough time to fix the problem and it’s time for him to be ousted from his job. “There is no question who is to blame for this increase. He needs to be recalled. The citizens of Los Angeles have had enough of this,” she said.

“The Los Angeles Times reported there is a $57 million a year program just to get toilets on the streets. We are dealing with environmental crimes, the type that are illegal in the state of California, you can't allow fecal matter to go down the storm drains. It's been happening for the past six years, it's illegal to do that,” she said.

“We need to have people committed to state hospitals under conservatorship and people need to be taken off the streets, we need health screenings, these people are dying in our streets, they are vulnerable to diseases because of their immune systems,” Datig added, saying “there is no prevention, no treatment, there is no interdiction. There is no incarceration.”

“People are allowed to commit crimes while the taxpayer has to step over a homeless guy to get to his office and is forced to pay taxes to continue this situation, it's outrageous.”