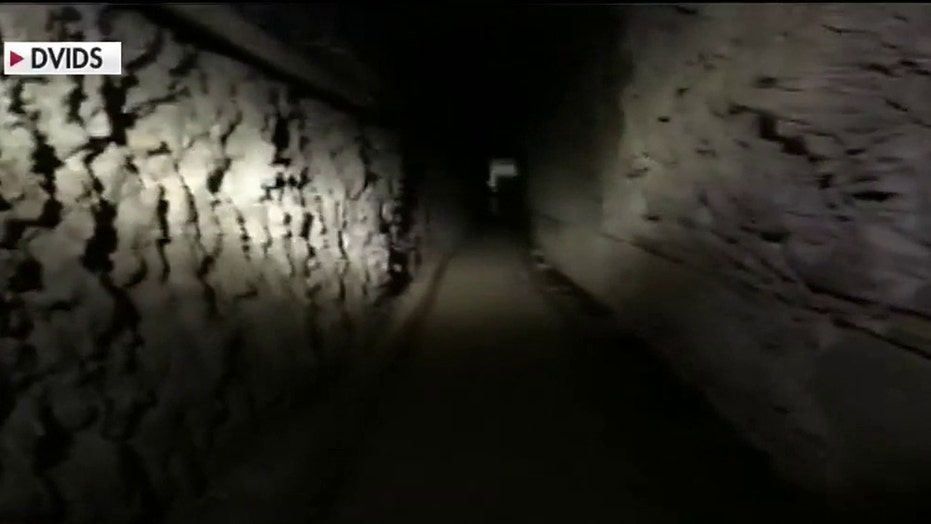 U.S. authorities discovered the longest smuggling tunnel ever found along the southwest border.

The tunnel originates in Tijuana, Mexico, near the Otay Mesa Port of Entry and extends a total of 4,309 feet long -- more than three-quarters of a mile. The next longest tunnel in the U.S., discovered in San Diego in 2014, was 2,966 feet long.

"While subterranean tunnels are not a new occurrence along the California-Mexico border, the sophistication and length of this particular tunnel demonstrates the time-consuming efforts transnational criminal organizations will undertake to facilitate cross-border smuggling,” Cardell Morant, acting special agent in charge of Homeland Security Investigations (HSI) San Diego, said in a press release. The investigation that led to the discovery spanned many years and involved various agencies.

A tunnel entry team agent stands by for security at a tunnel spur that went off into a different direction.

The tunnel features a complex cart and rail system, forced air ventilation, high-voltage electrical cables and panels, an elevator at the tunnel entrance and a complex drainage system, according to U.S. Border Patrol.

No arrests or seizures have been made at this point after the discovery of the tunnel.

“The investigation continues, and I am confident that our hard work and dedication to uphold the law will lead to future arrests and seizures,” Deputy Chief Patrol Agent Aaron Heitke said.

DHS BOSS WARNS CARAVAN MIGRANTS WILL BE SENT HOME IF THEY REACH U.S., AMID REPORTS OF VIOLENCE

The tunnel is around five and a half feet tall and two feet wide and 4,309 feet long, averaging 70-feet deep and had a ventilation system, electricity and a rail system designed to move large packs of drugs.

Due to the composition of the underground soil in this area, the tunnel is mostly self-sustaining.

The tunnel is approximately 5 and a half feet tall, 2 feet wide and has an average depth of 70 feet from the surface. An offshoot of the main tunnel was discovered at around 3,500 feet into the U.S. It traveled several feet and came to an end without breaching the surface. It led agents back to the main tunnel where they discovered several hundred sandbags blocking the suspected former exit of the tunnel.

"As efforts to strengthen security on our Southern border increase, Mexican drug cartels are forced underground to smuggle their deadly drugs into the United States," DEA Special Agent in Charge John Callery said. "The sophistication of this tunnel demonstrates the determination and monetary resources of the cartels."