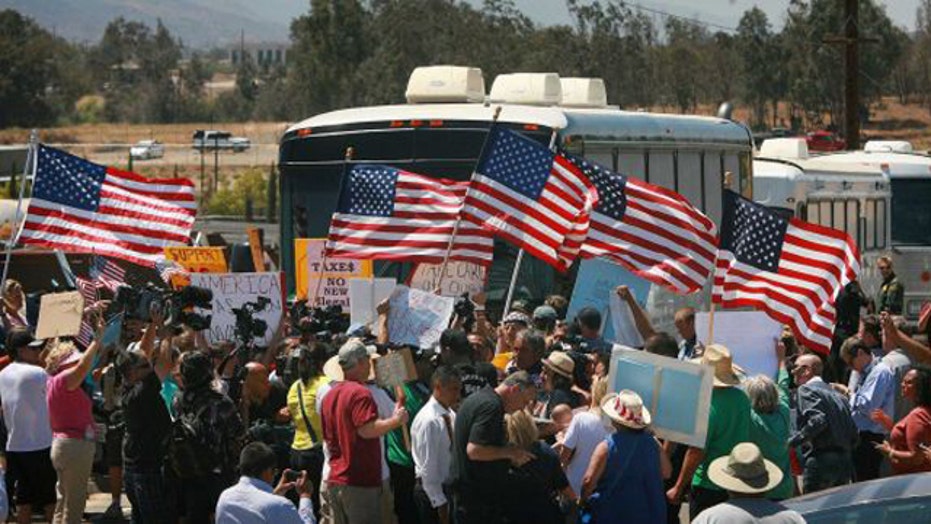 The small city about 60 miles north of San Diego has been in the national spotlight since last Tuesday when a group of protestors stopped three federal buses filled with mostly women and children from central America. The buses eventually turned around and left.

On Friday, six protestors were arrested but that hasn’t stopped even more from showing up again on Monday. Many say they’re worried about the immigrants being released in their community after they’re processed.

“I don’t think that mobbing a bus of terrified children is the way to go about it," said Cassandra Rules. "I think if you want to protest this take it to your politician's doorstep, take it to the White House. Don’t terrorize little kids who are already scared.”

The mayor of Murrieta said he has received little information from federal authorities. He said a planeload of immigrants arrived in San Diego Monday morning and that he is waiting to see if buses will arrive to Murrieta later in the day.

“We’re trying to get information out to both sides of the protest line but when we don’t have answers people get very very frustrated,” Mayor Alan Long said.

Long said the current process of shipping illegal immigrants to small city processing centers is a Band-aid on a bigger problem. He said the world has arrived on the door-step of his community over the last week.