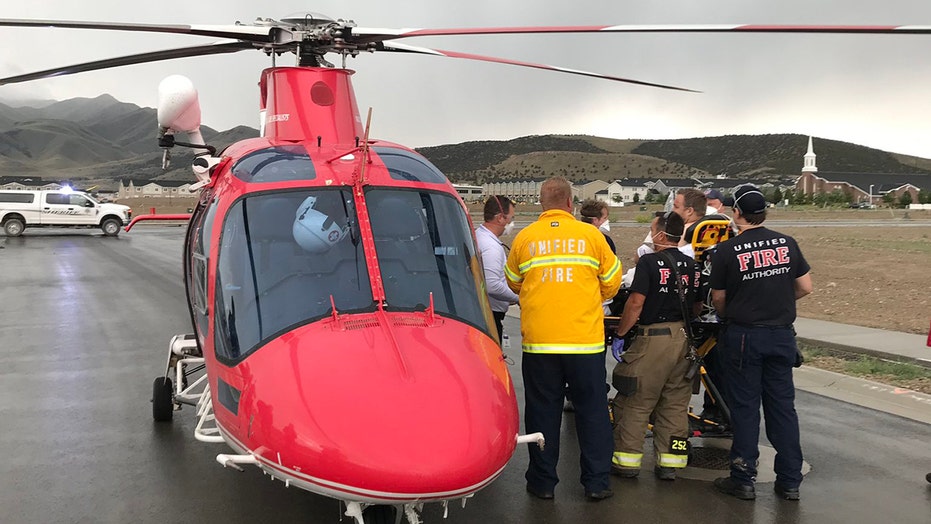 A man in Utah was knocked unconscious and had to be airlifted to a hospital on Sunday after a lightning strike nearby as he was hiking, according to officials.

Utah County Sheriff's Sgt. Spencer Cannon tweeted the man was walking on a trail when a bolt of lightning struck behind him, knocking him unconscious.

Cannon said the man was walking with his wife, who was also "impacted" by the strike, but not seriously.

The man was then airlifted to a hospital by medical helicopter, where he regained consciousness.

Cannon told FOX13 on Sunday the man is having "significant" problems with motion and feeling in his extremities.

A man was knocked unconscious after a lightning strike nearby as he was hiking on Sunday near Eagle Mountain, Utah. (Utah County Sheriff's Office)

"This may well be just the beginning of a journey for him, because lightning strikes are notoriously difficult to recover from," he said. "No doubt, he's going to have some difficulties in recovery."

The man is expected to survive, but there were initial concerns whether or not he would make it.

A man was knocked unconscious after a lightning strike nearby as he was hiking on Sunday near Eagle Mountain, Utah. (Utah County Sheriff's Office)

So far in 2020, there have been two fatal lightning strikes, according to the National Lightning Safety County.

The first was reported on May 5 in South Carolina and the second on May 27 in Port St. Lucia, Fla. According to the NLSC, the U.S. averages three lightning fatalities through the end of May.

Lightning strikes about 25 million times a year in the United States and kills an average of 47 people, according to the National Weather Service.

"Although most lightning occurs in the summer, people can be struck at any time of year," according to the NWS.