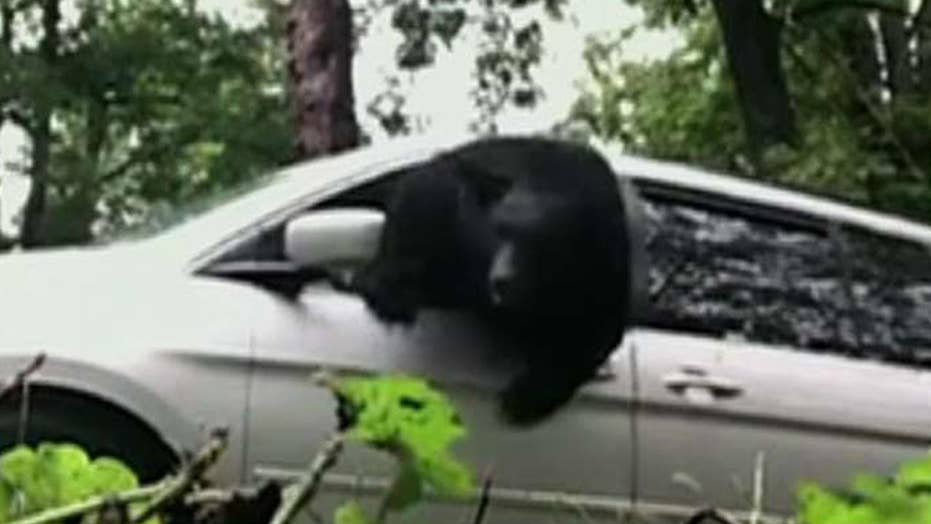 Trapped bear breaks through window to escape from minivan

A North Carolina woman was shocked Sunday to find a large black bear trapped in her minivan, helplessly thrashing around and tearing up the seats.

Nicole Minkin Lissenden told The Asheville Citizen Times she was at her parents’ house in Asheville when her minivan door seemingly cracked open on its own, as a stream of trash spilled out. Lissenden said she was embarrassed and went to the minivan to close the door.

About a half hour later, she noticed her windows were fogged up and she saw paw prints on the windows.

That's when Lissenden realized she had accidentally trapped a now-agitated black bear in her vehicle.

“The bear was getting more and more upset and thrashing around a lot, and that set off the alarm and started honking the horn,” Lissenden told the newspaper.

Lissenden said she called her husband and Animal Services, and a neighbor also came over to help, the Citizen-Times reported. Alex Lissenden, Nicole’s husband, attempted to open the sliding door via remote control -- but it was to no avail as the bear had damaged the door.

“So my husband had to go up and unlock the windows on the doors,” Nicole Lissenden said.

The driver’s side window came down a bit and the bear was able to pop out and escape.

“He tore all of the kids' car seats out and tore up the seats to the car,” Nicole Lissenden said. “He was just thrashing and clawing trying to get out of that van.”

Karen Brown, a neighbor, said the bear went toward her house next. She came home to find paw prints and open drawers in her kitchen, adding the bear walked past her fresh pumpkin bread and chili, instead grabbing muffin mix.

The bear left the premises shortly after.