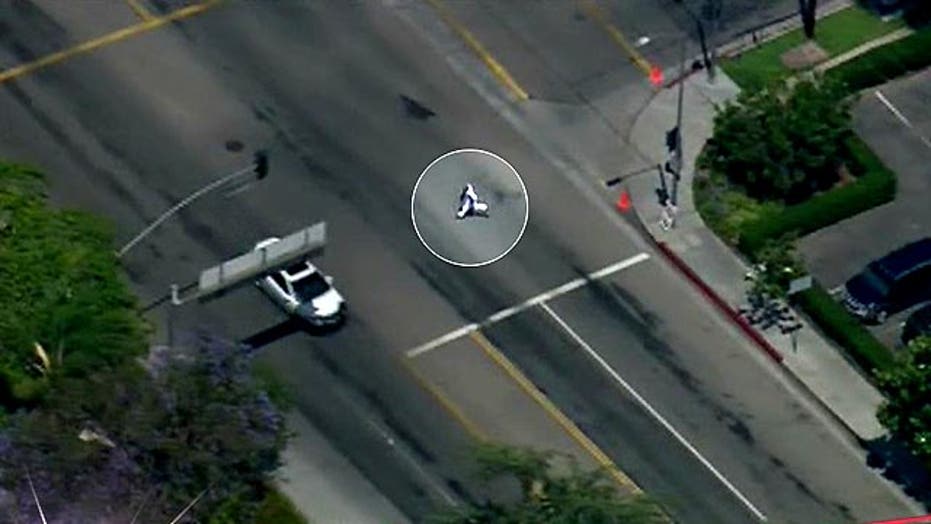 Suspect went up to roof of a home

Los Angeles police have captured a wanted man who earlier was pursued by police at high speeds and then barricaded himself in a San Fernando Valley home with a rifle.

Television reports showed the suspect walk out with his hands up and then lie face-down on the grass in the backyard of a home with his hands behind his head and two dogs nearby. Seven SWAT officers converged on him five hours after the incident began.

The man, who had an arrest warrant out on him for allegedly making terroristic threats, had barricaded himself inside a home on Hartsook Street, a residential neighborhood in the north Hollywood area, MyFoxLA.com reported. He was believed to be alone.

The chase began at about 10:15 a.m. when police tried to arrest the man for allegedly making the criminal threats several days ago. But he drove off, leading to a 45-minute chase along several freeways that ended in North Hollywood, police said.

A California Highway Patrol officer says the incident was reported to have begun with a theft and possible domestic violence.

Los Angeles police tweeted Monday afternoon that the suspect is described as a 40-year-old Hispanic man who is wearing a white shirt and white pants.

He pointed the rifle at his pursuers several times during the chase, but it's unclear whether he fired it, Cmdr. Andy Smith said.

After the man pulled over and exited his car, he walked through several backyards and at one point climbed onto a roof, pacing along its spine and stopping to lean on the rifle multiple times, before entering a home, police said.

Several blocks of the area were sealed off, nearby homes evacuated and a SWAT team called in.

Shortly before 2 p.m., dozens of students from a nearby private school were evacuated to a park to meet their parents, holding hands, lugging backpacks and walking under a freeway overpass. Police guarded them.

A preschool and about a half-dozen elementary, middle and high schools were locked down. But most of the lockdowns were lifted about four hours into the standoff, Los Angeles Unified School District officials said.

Most were out of session for summer, but two campuses had a total of about 135 students who would be picked up by their parents, authorities said.

Edith Faver, who lives down the street from the barricaded home, said she was alone with her two cats and had no television so she got a shock when she stepped outside and saw the flashing lights of a police helicopter overhead.