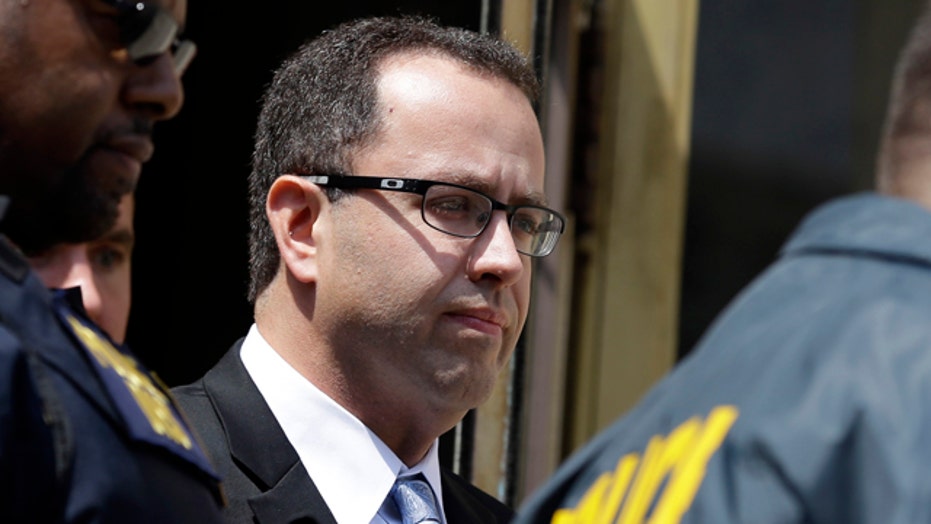 INDIANAPOLIS – Longtime Subway pitchman Jared Fogle capitalized on his business trips to New York City to arrange sexual encounters with minors in luxury hotels, federal prosecutors said in charging the Indiana man in a case that also documented his acceptance of child pornography from a close associate.

Fogle agreed Wednesday to plead guilty to allegations that he paid for sex with girls as young as 16 and received child pornography. The case already has destroyed his career with the sandwich-shop chain and could send him to prison for more than a decade.

Prosecutors allege Fogle knew the pornography he received had been secretly produced by the former director of his charitable foundation, which sought to raise awareness about childhood obesity and arranged for Fogle to visit schools and urge children to adopt healthy eating and exercise habits.

"We're dealing with a celebrity who had the access, power and resources to do anything he wanted to do in the world but he chose to utilize that to cajole, convince and even take advantage of children"

Assistant U.S. Attorney Steven DeBrota said Fogle used his trips to New York on behalf of both Subway and his Jared Foundation to seek out child prostitutes for sex.

"We're dealing with a celebrity who had the access, power and resources to do anything he wanted to do in the world but he chose to utilize that to cajole, convince and even take advantage of children," said Indianapolis Police Chief Rick Hite, whose department helped analyze evidence seized July 7 from Fogle's suburban Indianapolis home.

DeBrota stressed that "at no event was he using the foundation to get at the child prostitutes."

The court document detailing the charges against Fogle states that he paid for sex at New York City hotels with two girls under age 18, one of whom was 17. The plea agreement refers to the two as being 16 and says that one of them also had sex with Fogle after she turned 17. Federal prosecutors could not explain the discrepancy between the two documents.

Authorities also said Fogle offered to pay adult prostitutes a finder's fee if they could connect him with minors for sex acts, including some as young as 14 or 15 years old.

A tight-lipped Fogle sat in federal court during his initial hearing with his hands clasped and quietly answered "no" when the judge asked whether he had any questions about his rights. He is expected to enter the formal plea at a later date to one count each of travelling to engage in illicit sexual conduct with a minor and distribution and receipt of child pornography.

The agreement released by prosecutors said Fogle will pay $1.4 million in restitution to 14 minor victims, who will each receive $100,000. He will also be required to register as a sex offender and undergo treatment for sexual disorders.

The government agreed not to seek a sentence of more than 12½ years in prison, and Fogle agreed not to ask for less than five years, according to court documents.

Federal judges have wide discretion in sentencing, and Fogle could get a longer sentence. The child-porn charge carries a maximum penalty of 20 years in prison. The count involving sex with a minor is punishable by up to 30 years.

Fogle "knows that restitution can't undo the damage that he's done, but he will do all in his power to try to make it right," defense attorney Jeremy Margolis told reporters.

The married father of two, he added, has a "medical problem" and "expects to get well," but he did not elaborate.

Fogle, 37, whose wife filed for divorce Wednesday, became Subway's pitchman after shedding more than 200 pounds as a college student, in part by eating the chain's sandwiches. He was the public face of the company for more than 15 years — a period in which its number of locations tripled, making Subway the world's largest restaurant chain.

Subway suspended the partnership in July after agents raided his home in the affluent Indianapolis suburb of Zionsville, and the chain said this week that it had ended its relationship with Fogle.

Federal prosecutors allege in the documents that Fogle traveled to pay for sex acts, including with minors, from 2007 until as recently as June and that he repeatedly planned business trips to coincide with his sexual pursuits.

Fogle is accused of having sex with two 16-year-old girls at hotels in New York City. One of the girls told investigators she had sex with Fogle three times in November 2012, when she was 16, and again two months later, when she was 17.

The girl told Fogle her age when they first met, according to the court documents.

After that meeting, Fogle allegedly texted the girl and offered to pay her a fee if she could find him another underage girl to pay for sex acts.

During these discussions, Fogle "stated that he would accept a 16-year-old girl, while stating that the younger the girl, the better," the documents said.

Posts to social media place Fogle in New York around the dates of the alleged sex acts.

Two months before Fogle's home was raided, authorities arrested Taylor on charges that he produced and possessed child pornography. Investigators said they discovered a cache of sexually explicit photos and videos Taylor allegedly produced by secretly filming minor children at his home.

Prosecutors also allege that Fogle received from Taylor multiple images and videos, some of which were taken by a video camera hidden in a clock radio that filmed children changing clothes or bathing. Some were taken in buildings were Taylor lived.

The documents said Fogle knew those depicted were minors, some as young as 13 or 14 years old, and in some cases knew the minors involved by name and had met them "during social events in Indiana."