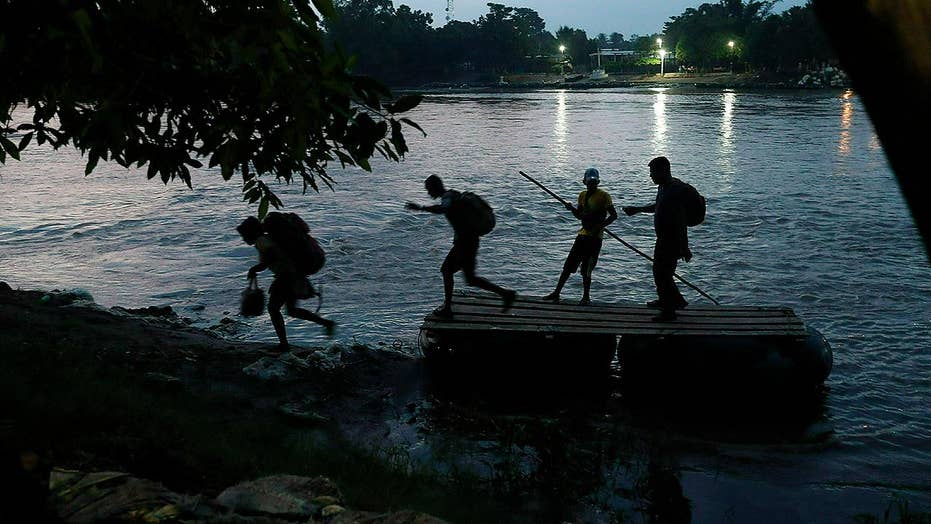 An explosion in asylum requests from immigrants facing deportation has overwhelmed U.S. courts and denial of the requests does little to keep illegal immigrants out, according to federal statistics.

Thousands of migrants are hoping to seek asylum, even though experts say they have poor cases and little chance of gaining the status. But that has not stopped hundreds of thousands (possibly millions) of asylum seekers from landing permanently in the U.S., where they live as illegal immigrants, experts say.

The caravan, and others like it, have put President Trump’s sweeping pledge to secure the border to the test, and dealing with the court backlog and administrative policies is a White House priority. On July 15, the Trump administration announced a new policy tightening restriction for asylum seekers from Central America — a major crackdown that's likely to face a legal challenge in the near future.

According to a new rule published in the Federal Register, asylum seekers who pass through another country first will be ineligible for asylum at the U.S. southern border. The rule, expected to go into effect on July 16, also applies to children who have crossed the border alone.

There are some exceptions: If someone has been trafficked, if the country the migrant passed through did not sign one of the major international treaties that govern how refugees are managed (though most Western countries have signed them) or if an asylum-seeker sought protection in a country but was denied, then a migrant could still apply for U.S. asylum.

Migrants are entitled under both U.S. and international law to apply for asylum. But there already is a bottleneck of would-be asylum seekers waiting at some U.S. border crossings to make their claims, some waiting as long as five weeks. For others, the process could even take years.

"The reality is that most people in [caravans] will not be found qualified for asylum, and many of them know it. Others are encouraged to, but likely their claims will not pass muster, especially under new guidance from Jeff Sessions, to get back to a stricter adherence to the law," Jessica Vaughan, director of policy studies for the Center for Immigration Studies — a Washington, D.C.- based research institution, previously told Fox News.

Vaughan suggested it would be quicker to process these claims "right away" at the border rather than putting asylum requests on hold.

Read on for a closer look at immigration, by the numbers.

By the end of March 2019, there were more than 327,000 pending affirmative applications pending with the U.S. Citizenship and Immigration Services, according to data provided by the agency. Last year around that time, asylum seekers have to wait around 1,000 days — on average — for their cases to be reviewed in an immigration court, the American Immigration Council reports.

In this Oct. 23, 2018 image, Ana Delia Soto Duarte, who seeks asylum in the United States from her home in Guerrero, Mexico, waits in hopes of hearing her number called to cross the border in Tijuana, Mexico. (AP Photo/Gregory Bull)

The backlog in the immigration courts has grown significantly in the past five years. In November 2018, there were around 809,000 pending cases on the U.S. immigration court's docket, according to a report by Transactional Records Access Clearinghouse (TRAC) at Syracuse University.

This recent influx may be due to an increase in credible fear claims in recent years. Immigrants may declare "credible fear" if they are afraid to return to their home country and thus cannot be deported from the U.S. until their asylum application is formally processed.

"Here are the shocking statistics: in 2009, DHS conducted more than 5,000 credible fear reviews. By 2016, that number had increased to 94,000. The number of these aliens placed in removal proceedings went from fewer than 4,000 in 2009 to more than 73,000 by 2016 — nearly a 19-fold increase — overwhelming the system and leaving those with just claims buried," Attorney General Jeff Sessions said in October 2017, claiming credible fear claims have been "abused" at the border.

However, The Washington Post noted roughly 76 percent of those who made fear claims in 2016 were found to be credible in interviews — though that doesn't necessarily mean they were granted asylum.

TRUMP'S BORDER WALL: A LOOK AT THE NUMBERS

Vaughan said most people pass the "credible fear" test, but only a handful actually gets approved.

"According to Department of Justice statistics, half of those let in after passing credible fear and released do not even submit the formal asylum application, and half of those who do end up skipping out on the hearings. Of those Central Americans who complete the process, only 20 percent are approved," Vaughan told Fox News.

She added, "We need to align the credible fear standard more closely with the asylum standard. Even now under Trump 75 [percent] pass credible fear and are allowed in, even though we know they are not likely to qualify or even complete the process."

In fiscal 2017, Mexico had the highest asylum application denial rate out of 10 nationalities, according to research. (Scott Olson/Getty Images)

In the fiscal year 2018, U.S. immigration courts ruled on more than 42,000 cases, and 65 percent of requests were denied, data obtained by TRAC in November 2018 reveals. According to the research, Mexico had the highest denial rate in 2018 — with courts granting only 14.5 percent of applicants asylum. El Salvadorians had the highest success rate, with 23.5 percent of asylum applicants being approved, the institution reports.

When immigrants sense their asylum request will be denied, they may withdraw from the process and continue living in the U.S. illegally. In fiscal year 2018, there were more than 121,000 removal orders issued by immigration judges, per TRAC. In 2019, TRAC projects the number will rise to nearly 165,000.

“Saying a few simple words — claiming a fear of return — has transformed a straightforward arrest for illegal entry and immediate return too often into a prolonged legal process, where an alien may be released from custody into the United States and possibly never show up for an immigration hearing,” Sessions said in September 2018, per The Washington Post.

The Associated Press contributed to the story.