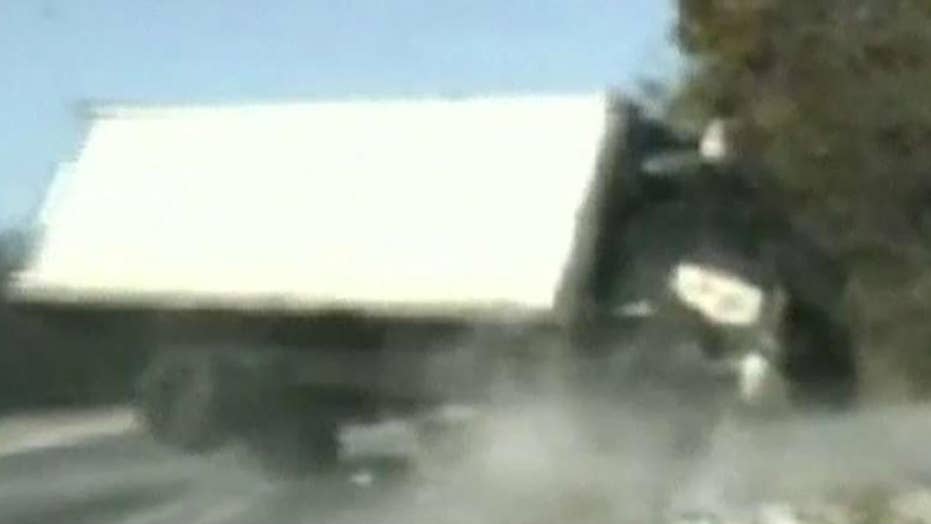 Illinois State Police dashcam catches the heart-stopping moment when a truck slides off the road where state troopers were assisting a driver.

This was about as close a call as you can get.

Two Illinois state troopers and a stranded motorist came within inches of losing their lives last week after a box truck jackknifed on an interstate during an ice storm.

The two troopers were helping to change a tire on a vehicle on the shoulder when the box truck lost control and started heading toward them and the woman they were assisting.

In the video released by police, the two troopers can be heard yelling "Watch out!" before pulling the woman out of the way.

The truck nearly hit two Illinois state troopers and a woman they were assisting on the side of the road on Nov. 12, 2019. (Illinois State Police)

State police said the woman ended up down in the highway ditch as the truck "literally passed over the top of her" and barely missed the two troopers.

"We just had a box truck slide off the road and hit us," one of the troopers can be heard saying. "I'm OK. One female injured in the ditch."

The two troopers escaped without injury, while the woman was treated and released from a local hospital.

"We were inches away from a different story being told," state police said. "Literally inches."

The driver of the box truck was cited for failure to reduce speed to avoid a crash. State Police said while it was not a Scott’s Law violation because the box truck driver had already moved over to the left lane, he was not showing due caution as he proceeded past the scene.

The incident, dubbed a "miracle on ice," is another reminder of the need for drivers to move over and slow down when they see vehicles on the shoulder with their lights on, according to state police.

"It is especially important during the snow/ice conditions. As you can see, sometimes it’s a matter of life or death as a stranded motorist," state police said. "It’s not just about us out there, it is people you know and love that we are assisting also."