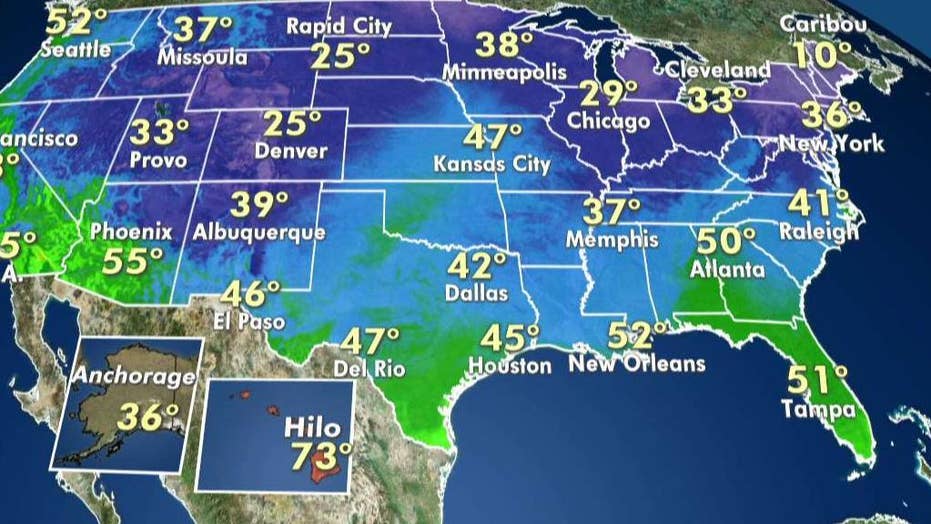 Heavy fog and icy road conditions are being blamed for a crash involving a tractor-trailer and charter bus on an interstate in Virginia early Sunday that sent dozens to area hospitals, according to officials.

The crash happened around 4:30 a.m. near mile marker 100 on Interstate 64, located about 25 miles west of Charlottesville. The Crozet Volunteer Fire Department said on Facebook the multiple vehicle accident involved a tractor-trailer, charter bus and several others.

Officials in Augusta County said on Facebook that 27 people involved in the accident needed non-life threatening, medical attention and were transported to area hospitals after the crash.

A truck was split in half after a multiple-vehicle crash on Interstate 64 in Virginia early Sunday. (Augusta County, Virginia)

Damage to tractor-trailer can be seen after a multiple-vehicle crash on Interstate 64 in Virginia on Sunday. (Virginia State Police)

After striking the truck, the charter bus involved in the crash ran off the side of the road, and came to a stop along the guardrail.

Damage to a charter bus after a mutli-vehicle crash on Interstate 64 in Virginia on Sunday morning. (Augusta County, Virginia)

The front of the charter bus sustained serious damage in the crash in photos released by Virginia officials. The drivers of the bus and tractor-trailer were among 15 transported to UVA Medical Center, where one person is listed in critical condition, according to CBS19.

As a result of the crash between the bus and tractor-trailer, officials said there were seven other minor crashes in the area. Images from the scene showed one vehicle overturned in the median of the highway, and another with front-end damage.

Several minor crashes were reported due to icy conditions on Interstate 64 in Virginia on Sunday. (Augusta County, Virginia)

The crash closed both directions of the highway for several hours, and state police warned drivers traveling over the Blue Ridge Mountains on Sunday to slow down when traveling through the area. Fog and icy conditions reportedly were to blame for the earlier accident.

The National Weather Service Baltimore/Washington had issued a winter weather advisory until 11 a.m. on Sunday for areas around the Shenandoah Valley above 2,000 feet due to reports of freezing drizzle.

"Freezing drizzle looks to even be making it down to the valley floor for areas in the Winter Weather Advisory," the agency said. "Use caution when driving this morning, especially around I-81 and I-64 in the valley."

Shenandoah National Park said that parts of Skyline Drive had to be closed due to icy conditions.

"Winter weather advisory for motorists traveling across the Blue Ridge Mountains and at higher elevations near the mountains: Freezing drizzle and fog is being reported in those areas," the Virginia Department of Transportation said. "Motorists should drive with extreme caution."

The NWS' Weather Prediction Center said that moisture from a coastal storm off the coast of North Carolina is expected to transport northward into a region with a "much cooler air mass," as seen in the Shenandoah Valley on Sunday, and bring the threat of freezing rain and drizzle into parts of the interior Northeast by Monday.

"We have this storm going down across parts of the mid-Atlantic coastline," Fox News' Chief Meteorologist Rick Reichmuth said on "Fox & Friends." "This is a really strong coastal storm; it's bringing really rough conditions across the ocean we'll see some beach erosion from this."

By Monday, Reichmuth said the storm will "very slowly' pull off to the north.