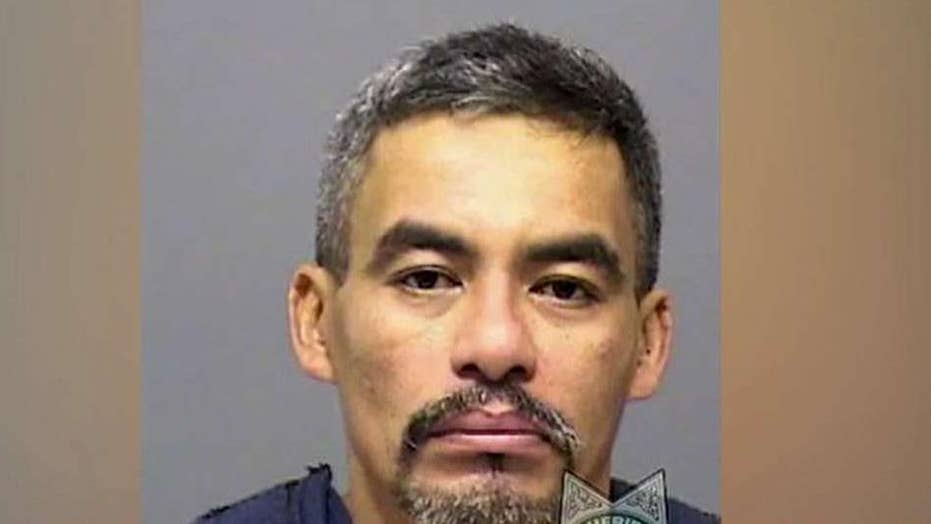 ICE is going on the offensive after Washington state passes one of the strictest sanctuary laws in the country; Dan Springer reports.

Immigration and Customs Enforcement officials in the Pacific Northwest are taking the unusual step of criticizing Washington state’s new sanctuary state law and giving detailed examples of the danger they believe it presents to the public.

The office recently issued a press release which lists seven cases in which ICE requested detainers on criminal illegal aliens being held in local jails and those requests were ignored, many with tragic consequences.

WASHINGTON MAN ASSAULTS WOMAN DAYS AFTER BEING RELEASED FROM JAIL FOR RAPING HER LAST YEAR: PROSECUTORS

According to ICE, Rosalio Ramos-Ramos was arrested last January for murder and dismembering his victim. It happened just months after Ramos was released from a Washington jail despite ICE’s request for an immigration detainer and notification of his pending release, neither of which were honored.

ICE also cites the case of Mexican national Martin Gallo-Gallardo, who was in a Clackamas County Oregon jail. The statement said jail officials ignored ICE’s request for an immigration detainer and notification of release. Gallardo was released and within months was re-arrested, this time for allegedly murdering his wife.

The most recent case involves Francisco Carranza-Ramirez, who was also in the U.S. illegally. He was convicted of raping a wheelchair-bound Seattle woman twice. He was sentenced to time served and released, under the judge’s order that he self-deport back to Mexico. King County Sheriff’s officials say he eventually did return to Mexico, but not before assaulting his victim a third time.

Meantime, Washington state just passed what some immigration advocates are calling the strongest sanctuary state law in the country. It forbids local jails and state prisons from honoring ICE immigration detainers and even prevents corrections officials from even letting ICE know about the pending release of a criminal illegal immigrant. The law also instructs the attorney general to draft new rules restricting ICE agents from making immigration arrests at courthouses and hospitals.

In signing the law, Democratic Gov. Jay Inslee reportedly said, “We will not be complicit in the Trump administration’s depraved efforts to break up hard-working immigrant and refugee families.”

“I think we’ve sort of hit a critical mass and this statute that the state passed is one step too far,” said Wilcox in an interview with Fox News.