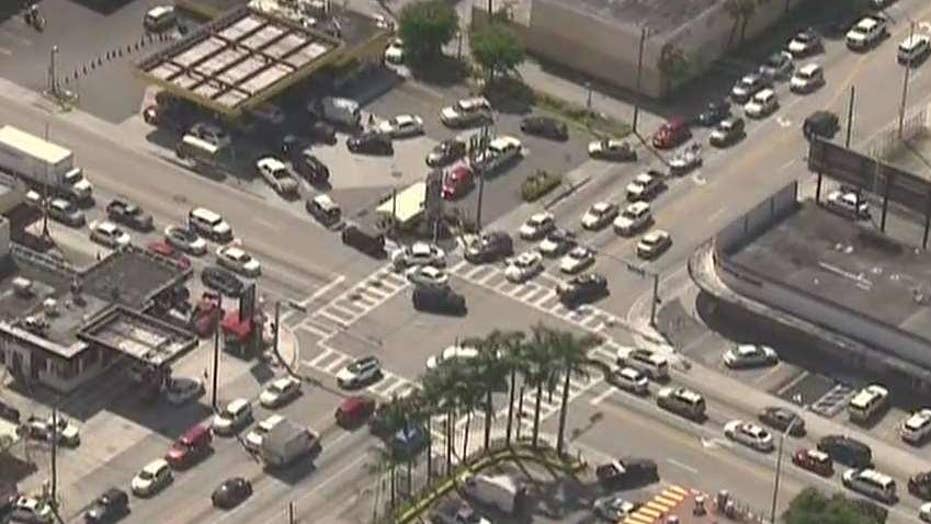 Floridians clogged highways in a desperate scramble to get out of Hurricane Irma's crosshairs, as the deadly Category 4 storm took direct aim at the southern United States, shifting westward Friday as the worst case scenario became the most-likely situation.

Irma, downgraded from Category 5, was still regarded as the most powerful in the Atlantic in recorded history, bringing sustained winds of 150 mph – not as strong as the 185 mph of previous days, but forceful enough to cause severe damage to homes and other structures.

"This is a storm of absolutely historic destructive potential," President Trump said in a videotaped statement.

He urged all those in the storm's path to "heed all recommendations" from officials.

"Hurricane Irma continues to be a threat that is going to devastate the United States in either Florida or some of the southeastern states,'' FEMA Administrator Brock Long said at a news briefing on Friday. He warned that parts of Florida would be out of electricity for days if not longer and that more than 100,000 people may need shelter.

Florida Gov. Rick Scott said during a Friday news conference the Florida Keys would begin to feel Irma's effects by Saturday morning. He said Irma, on its current path, was more deadly than Hurricane Andrew, a Category 5 storm that killed 65 in August 1992.

But Scott emphasized the seriousness of getting to a safe location.

Puerto Rico still had hundreds of thousands of customers left without electricity.

Turks and Caicos lost communications as the storm struck, but the full extent of the devastation there was not immediately clear.

An update at 11 a.m. Friday from the National Hurricane Center showed Irma with wind gusts of 150 mph. The storm was moving about 14 mph, the hurricane center said

The hurricane center said its storm surge warning covers Sebastian Inlet southward around the Florida peninsula to Venice and the Florida Keys.

Its hurricane warning covers Jupiter Inlet southward around the Florida peninsula to Bonita Beach, as well as the Florida Keys, Lake Okeechobee, and Florida Bay.

In addition, a storm surge watch has been issued for North of Sebastian Inlet to Ponce Inlet.

Key West tweeted to residents that it's "not safe to stay" and Jacksonville Florida wrote on Twitter that residents need to "hunker down" in a secure place by 8 p.m. on Saturday night.

The Navy crews aboard the ships were able to offer medical support, security, heavy lift capabilities and other assistance, a U.S. Navy release said.

Gov. Scott said he's activated 4,000 members of the National Guard in Florida, and all 7,000 will be deployed on Friday.

Shifting forecasts have also raised the threat to the Southeast from Irma, prompting emergency declarations in the Carolinas and coastal Georgia, including areas that haven't suffered a direct hit from a major hurricane in more than a century.

Georgia Gov. Nathan Deal ordered a mandatory evacuation starting on Saturday from the state's Atlantic coast ahead of Hurricane Irma, including the city of Savannah. Nearly 540,000 residents on the coast were ordered to evacuate inland.

South Carolina Gov. Henry McMaster also declared a state of emergency. A major strike there would be the first in nearly 28 years.