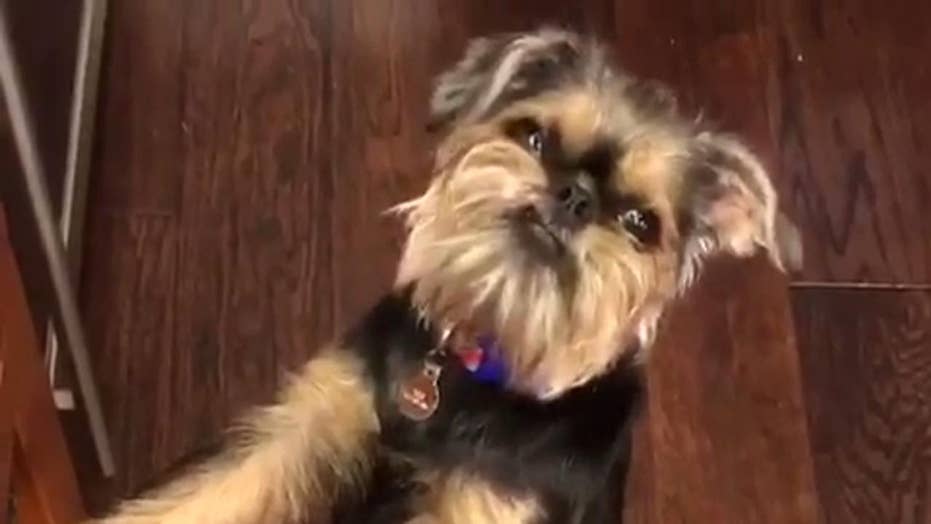 It was supposed to be one of the happiest days of her life: Hollywood makeup artist Trendee King was buying her wedding dress with her mother and sister.

But hours later, the day turned to heartbreak as King’s fiancée called from their San Jose, Calif., home to say their cherished year-old dog Theo was missing. Now, two weeks later, the wedding has been postponed indefinitely and no cost spared as King and fiancée James Galley, an executive at a Silicon Valley media giant, search for the 12-pound Brussels Griffon.

The couple has offered a $3,500 reward, hired a pet detective, searched with a bloodhound, started a social media campaign and plastered thousands of flyers, laminated posters and tarps throughout the South San Francisco Bay area.

“When you have a dog a little less than a year that you are falling madly in love with, and he is lost and you don't know where he is, your mind goes to a million scenarios,” said King, 34. “I have to take each day one day at a time, step by step. I wouldn’t have made it this far without my faith.”

King had spent years wishing for a Brussels Griffon after seeing the rare breed featured in the 1997 Jack Nicholson-Helen Hunt movie “As Good as it Gets.” So Galley, 37, gave Theo as a gift because King left her entire life behind to follow him to the San Francisco Bay area where he started a new job. They picked up Theo from a breeder on the way home from a Caribbean vacation last May, King said.

King had a successful career with clients like Paula Abdul, David Beckham, Laurence Fishburne and many of TV’s biggest reality shows.

Theo became a beloved member of the household and soon had fans of his own with an Instagram page titled "babybeard." He was rarely separated from his loving family.

Then on the fateful day of Feb. 13, Theo had surgery to remove an abscess on his back. King was in Los Angeles buying her wedding dress, so Galley dropped Theo off at the home of a pet sitter who could care for the recovering dog while he was at work.

But Theo had other ideas, bolting from the woman’s home when she opened the front door for a delivery. The sitter couldn’t catch him as he ran away, Galley said.

King rushed home and soon the couple deployed a campaign to rival that of a missing person.

The first step was retaining private investigator Jamie Katz, who specializes in lost pets. Katz says she has located 218 animals and has a 68 percent success rate.

One tipster reported seeing Theo in a Home Depot parking lot several miles from where he escaped. Katz arranged for a bloodhound to search the area. Despite five hours of effort, the bloodhound only hit on two areas: the parking lot and a homeless encampment under a freeway about half a mile away. None of the homeless recalled seeing Theo.

Another tip involved a dog that was hit by a car and buried by the roadside. The couple dug up the unrecognizable remains and took the animal to a veterinarian, who found no signs of Theo’s microchip.

Then two people called to report a dog resembling Theo at a department store in a shopping cart. Two others reported a possible sighting at a Taco Bell. Both locations were checked out and found to be false sightings.

Tips have dwindled, so Katz is expanding the placement of posters this week. She said constant dedication and hard work have helped her find animals even 100 days after they’ve gone missing.

“Theo will be found,” Katz said.

As for King, she says she is comforted by the numerous well-wishers on social media, including one woman who said her dog came home after a year.

“Theo is my best friend, we did everything together – grocery shopping, the dog park – we slept nose-to-nose,” King said. “There's something in me that knows he's alive and knows he's OK. All of this is happening for a reason.”