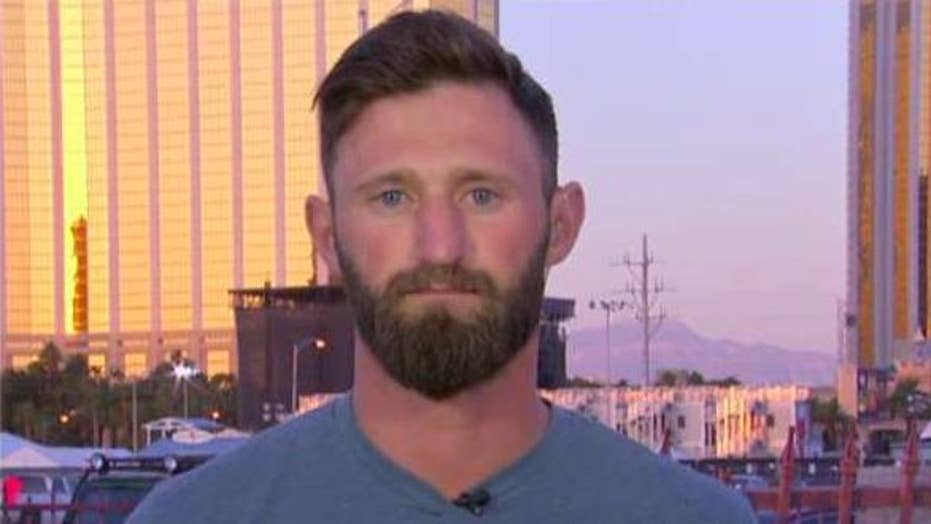 A U.S. Marine vet helped rescue more than a dozen people during the Las Vegas shooting attack Sunday with quick thinking he credited to his military training.

Taylor Winston, 29, stole a utility pickup truck he found on the concert grounds and transported several injured people to the hospital before ambulances could arrive on the scene, The Orange County Register reported.

Winston was reportedly at the concert with his girlfriend and friends when attacker Stephen Paddock began shooting at the crowd from his hotel room on the 32nd floor of the Mandalay Bay Resort and Casino in Las Vegas, Nev., he told CBS News.

Police officers and medical personnel stand at the scene of a shooting near the Mandalay Bay resort and casino on the Las Vegas Strip, Monday, Oct. 2, 2017, in Las Vegas. Multiple victims were being transported to hospitals after a shooting late Sunday at a music festival on the Las Vegas Strip. (AP Photo/John Locher) (Copyright 2017 The Associated Press. All rights reserved.)

Paddock killed at least 58 people and injured more than 515 others in the shooting spree.

“The shots got louder and louder, closer to us and saw people getting hit, it was like we could be hit at any second,” Winston said. “It was a mini war zone but we couldn’t fight back.”

The vet said they ran for cover and hopped a fence to get to safety. Once he landed on the other side, he said he reportedly saw a bunch of white trucks.

“I tested my luck to see if any of them had keys in it, first one we tried opening had keys sitting right there,” he said. “I started looking for people to take to the hospital. There was just too many and it was overwhelming how much blood was everywhere.”

Winston and his friend reportedly made two trips to Desert Springs Hospital Medical Center, squeezing “probably 20 to 30” victims in the backseat and in the bed of the truck, CBS News said. When they returned to the shooting scene for a third pick up, he said it looked like emergency responders had it under control, The Orange County Register reported.

The vet reportedly returned the truck, parking it a few blocks away from the venue.

Winston, who served two tours in Iraq before being honorably discharged from the Marines, said he thought his military training helped him snap into action, CBS News reported.

But he added that there were a lot of “courageous people” on the scene helping each other out and said he was “glad that I could call them my country folk.”