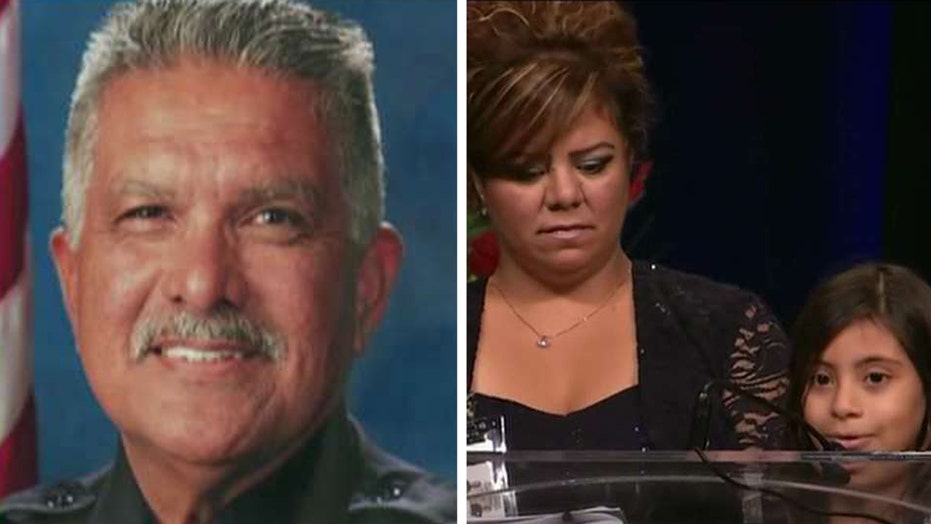 Thousands of people gathered Tuesday to remember a rookie police officer just back from maternity leave and a veteran only months away from retirement who were shot to death in what authorities called an ambush by a gang member.

Relatives and a co-worker told officers from across the country and other mourners that Palm Springs police officer Jose "Gil" Vega, 63, loved coffee and doughnuts, golf and telling jokes -- and above all, public service.

Lesley Zerebny, 27, was remembered as a dedicated new officer passionate about helping others and with a promising law enforcement career ahead of her.

The youngest of Vega's eight children, 8-year-old Vanessa, addressed the 10,000 people who converged on the Palm Springs Convention Center for the memorial service.

"He will always stay in our hearts," she said of her father. "Even though we can't see him doesn't mean he can't see us."

Authorities say the officers were responding to a domestic disturbance call on Oct. 8 when a 26-year-old ex-convict opened fire with an AR-15 rifle through a metal screen door at his family's home.

The deaths have rocked the tight-knit resort town 100 miles east of Los Angeles. Residents have left scores of bouquets, balloons and notes outside the police station and have sold T-shirts to raise money for the officers' families.

Suspect John Felix has pleaded not guilty to murder, attempted murder and weapons charges. He is being held without bail and prosecutors have not yet said if they will seek the death penalty.

At the memorial service, Zerebny's smiling picture was adorned with flowers and Vega's coffin was draped with an American flag.

Andrew Vega said his uncle was born poor and served as a role model for him and other young Latinos. The officer told his nephew to set a good example when he set out to become a teacher years ago.

"I can only hope that my students looked at me the way I looked at him: sturdy, strong and an image of what is possible in this country," Vega said.

Zerebny had recently returned to patrol duty after giving birth to a now-4-month-old daughter.

She came from a law enforcement family and as a child was a spirited prankster who loved to pick up rats, lizards and even snakes with her hands, said California Highway Patrol Chief Tom McCreary, a family friend.

As an adult, she smoked cigars and shot guns with male friends. And as a new mother, she relished seeing her infant daughter gaze into her eyes for the first time, said Palm Springs police detective and friend, Chris Jaeger.

"I keep wishing this were all not real, that I could just wake up from this nightmare," he said.

It has been tense year for police as officers have been shot to death in other cities including Lancaster, California, Dallas and Baton Rouge, Louisiana.

The shooting in Palm Springs marked the first killings of police in the line of duty in more than 50 years for the city of 47,000 people known as warm and welcoming to tourists, retirees, gays and lesbians.

"The threat to law enforcement throughout our country is very real," he said. "No community is exempt from such a tragedy."