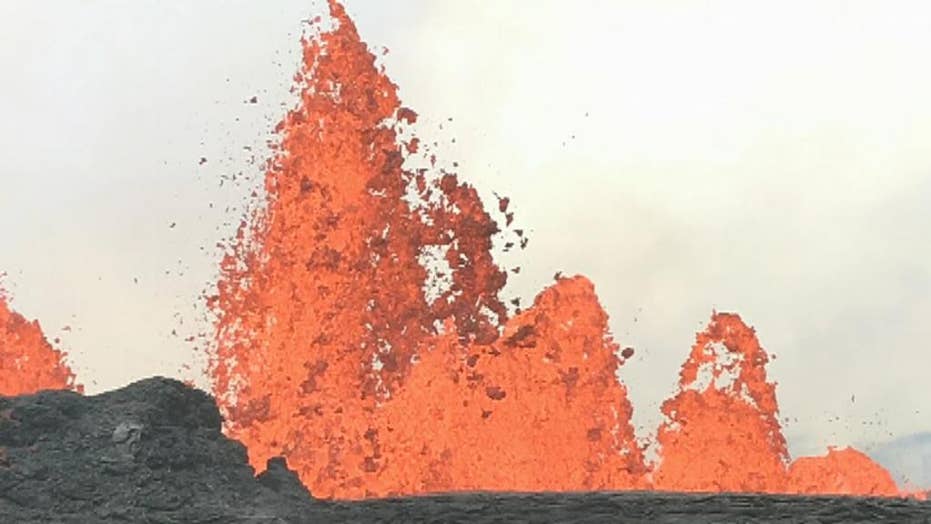 A man was seriously injured when he was hit with lava spatter while standing on his third-floor balcony — the first known injury related to Hawaii’s Kilauea volcano eruptions as new volcanic activity creates new threats in surrounding neighborhoods.

The homeowner on Noni Farms Road in Pahoa was hit with lava on the shin and taken to the hospital with serious injuries, Janet Snyder, spokeswoman for the Office of the Mayor, told Reuters.

"It hit him on the shin, and shattered everything from there down on his leg," Snyder said, adding that the lava spatter could weigh “as much as a refrigerator.”

“And even small pieces of spatter can kill,” she said.

No other information about the man and his condition were released as of Sunday morning.

"Even small pieces of spatter can kill"

Lava oozing out of the 22 fissures that opened since Kilauea volcano began erupting more than two weeks ago on the Big Island has wreaked havoc in surrounding neighborhoods. Officials on Sunday said there were reports of increased sulfur dioxide emissions as two lava flows entered the ocean.

To add to the dangers, officials also warned residents of laze, which could cause serious health hazards.

“Laze is formed when hot lava hits the ocean sending hydrochloric acid and steam with fine glass particles into the air,” Civil Defense Agency said. “Health hazards of laze include lung, eye and skin irritation. Be aware that the laze plume travels with the wind and can change direction without warning.”

Another four homes were destroyed Friday and Saturday, totaling to nearly four dozen structures demolished. A handful of people were trapped when a flow crossed a road Friday. Some had to be airlifted to safety.

"They shouldn't be in that area," said County Managing Director Wil Okabe.

“Fast-moving” flows on Saturday from fissure 20 in the volcano’s lower east rift zone ignited brush fires and incinerated everything in its path, Hawaii County Civil Defense Agency reported. Photos and videos from the scene showed a flow as smoke billowed from the edges where the bright red lava touched.

“County and state fire units are in the area, going door-to-door to make sure people are informed and check if they need assistance. Everyone needs to stay clear of this area,” officials said.

By Saturday night, the lava cut off Highway 137, a key escape route for residents in the area, at the 13-mile marker. Officials said they were monitoring a second flow early Sunday that was inching closer to the highway. Portions of Highway 137 and Highway 130 were closed.

Evacuation orders for two neighborhoods with nearly 2,000 people were given after a first fissure opened on May 3. Officials have been warning neighboring communities to be prepared to evacuate.