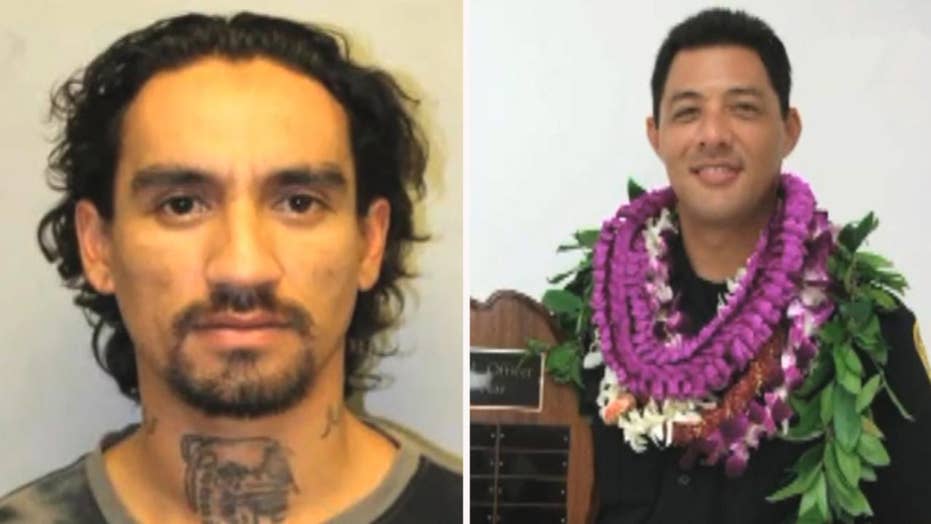 Officer Bronson Kaliloa was shot and killed after he stopped a vehicle driven by 33-year-old Justin Waiki.

The entire police force on Hawaii's Big Island remained on the hunt Thursday for the suspect wanted in the fatal shooting of an officer during a traffic stop this week, as new details emerged about the alleged gunman's extensive criminal past.

The Hawaii Police Department said in a news release that 33-year-old Justin Waiki shot Officer Bronson K. Kaliloa during a traffic stop around 9:45 p.m. on Tuesday near Mountain View, located south of Hilo.

Kaliloa, a 10-year veteran of the department, was struck in the "neck and leg area" and later died at a hospital, becoming the first officer to be fatally shot on the Big Island.

“This is probably the worst day in my 36-year career as a police officer,” Hawaii Police Chief Paul Ferreira said during a news conference. "This was an officer, a father, a son, a husband. Put a face to the name."

Ferreira said officers pulled Waiki over because they knew he was wanted on an outstanding no-bail warrant. A review of court records by Hawaii News Now showed Waiki was released on bail last year after being arrested for breaking his probation by leaving Hawaii for Las Vegas.

The 33-year-old received his first felony conviction in 2005 for forgery and was sentenced to 90 days in jail and home detention, the news outlet report. The judge in that case told Waiki he "has a gross disregard for authority. He does not give a rip, he is going to do what he wants to do," according to Hawaii News Now.

After serving probation, Waiki was arrested in 2013 for being found in possession of meth and a loaded gun and was given a sentence of 18 months in jail and four years’ probation. He was arrested again after violating his probation in Nov. 2017 and has had a warrant out for his arrest since March, when he missed a court hearing.

Police said Waiki is to be considered armed and dangerous and should not be approached. His picture has been distributed to airport security to prevent him from leaving Hawaii, KHON reported.

Police said that, during the shootout on Tuesday night, two of the four officers on the scene returned fire, but the suspect escaped into the brush in a largely rural area northeast of Kilauea volcano, which has sent gurgling streams of lava into residential neighborhoods on the island for two months.

The FBI's Honolulu office has offered a $10,000 reward for information leading to Waiki's arrest. The Big Island has 400 sworn police officers, according to the Associated Press.

Kaliloa joined the Hawaii Police Department on Aug. 1, 2008 after working as a bus driver on the island of Oahu, and was named "Officer of the Year" for his district in 2014. He had been married for 23 years and had three children.

"Bronson Kaliloa loved the Lord with all his heart and in his image he was a Proud Father of 3, ages 7, 4 and 3, an Adoring and Loving Husband and Devoted Son," his family said in a statement to KHON. "Passionate about serving his Lord and Community, he was always making sure people felt loved and respected.He’ll leave his family and friends a true example of one who unconditionally loves."

A family friend told the television station that Kaliloa also showed his compassion for others when lava started to erupt in May, and he was stationed at the checkpoints.

"There's a lot of aloha that went out to him from all the people that had any contact with him during the eruption," Kale Gumapac told KHON. "They really, really liked him, and like I said, it's a loss to the community that we lose a young man with so much aloha for the community."