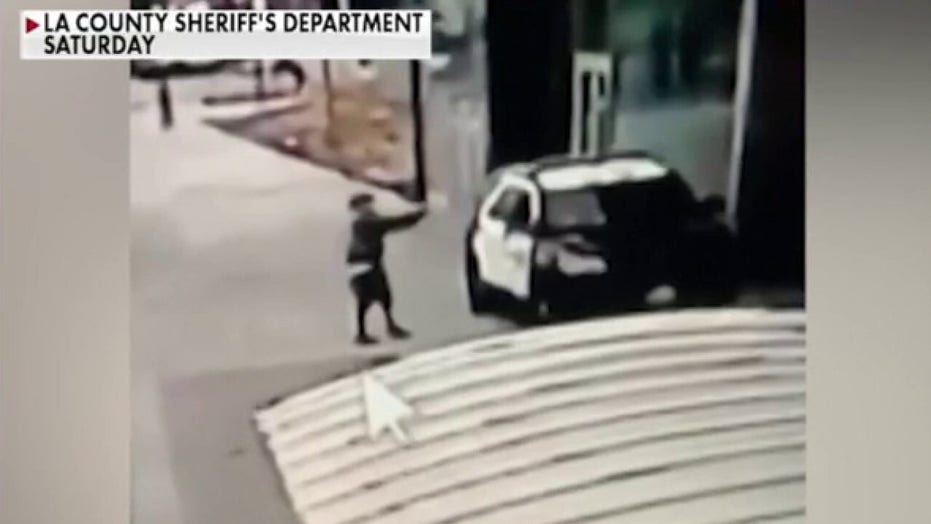 The loved ones of two Los Angeles County Sheriff's deputies wounded in an ambush over the weekend are concerned about the safety of law enforcement and the community at large in the wake of such a brazen attack, officials said.

The deputies were in their marked patrol vehicle Saturday evening near a Compton Metro station when a gunman opened fire. A 31-year-old female deputy, a mother to a 6-year-old boy, and a 24-year-old male deputy, were struck multiple times. Both are recovering after undergoing surgery.

The pair graduated from the academy 14 months ago, Sheriff Alex Villanueva said Saturday.

A video released by authorities appears to show the gunman approaching the parked squad vehicle and firing into the passenger side window before fleeing on foot. The county and private citizens have ponied up to offer a $175,000 reward for information leading to the capture of the gunman, Villanueva said Monday.

Ron Hernandez, the president of the Association for Los Angeles Deputy Sheriffs, the union that represents rank-and-file deputies, told Fox News the families of the injured deputies are worried for law enforcement personnel and communities over fears of similar attacks.

"I would go as far as they're concerned for the community," he said. "If they're willing to do this to law enforcement, then what would they do to your average citizen? They can't believe the callousness of a person that preys on law enforcement."

"That's that part they can't wrap their head around," he added.

The families were also concerned that the deputies found themselves in a life-and-death situation so early in their careers, Hernandez said. Most newly minted LASD deputies, unlike other law enforcement agencies, work in the courts or the county jail system before being put on the street

The shooting has elicited outrage among individuals and the law enforcement community nationwide. Hernandez believes the attack was fueled by anti-police rhetoric coupled by the gunman potentially being a criminal opportunist.

"Just like they would take the opportunity to steal a woman's purse or rob a bank or liquor store," Hernandez said. "Who knows what drives that mentality. It's not like they walked in somewhere and engaged in a gunfight.

"They literally preyed on two deputies that were providing security, doing their jobs and weren't faced with a confrontation," he added. "It was the equivalent of a drive-by shooting.

Outside the hospital where the deputies are recovering, protesters converged hours after the shooting to yell anti-police slogans, leading to a confrontation between demonstrators and authorities.

"I think it really is an anomaly," Hernandez said of the anti-cop sentiment. "I don't think this is something anybody wants to see."

Anyone wishing to make a donation to help the two deputies can donate to ALADS.org.