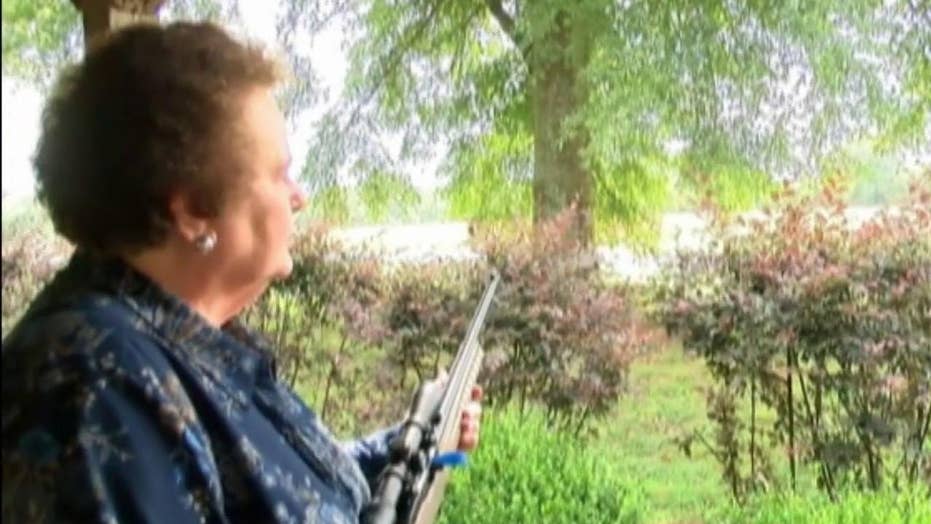 A gun-wielding grandmother in Alabama confronted a wanted man in her driveway on Monday after he crashed a stolen car near her home, according to investigators.

Marcia Black, 75, said she pointed a rifle at the suspect while her 15-year-old granddaughter called 911.

“I was just calm as can be. I knew I was in control,” the grandmother-of-four told WAAY-TV on Tuesday.

Marcia Black, 75, said the suspect got down on his knees after she fired a shot in the air. (WHNT/WZDX)

She said she fired a shot in the air to stop Powers from getting closer to her house where two of her grandchildren reportedly were watching from inside.

“I wanted to keep him at a distance. I didn’t intend to kill him. I just wanted him to think that I would shoot him,” Black said.

She added, “He wouldn’t get down so I shot in the air and he realized I meant business, so he got down to his knees.”

Black said he stayed down on his knees until deputies arrived a short time later, adding that when deputies got there, Powers tried to run, but it wasn't long before he was arrested.

“He feared the deputy more than he did my rifle and he jumped up and ran zig-zag right across the field,” she said.

“That’s just amazing to me that I got to witness my grandmother in action,” Black’s granddaughter said.

Powers has been charged with car theft and attempting to elude.