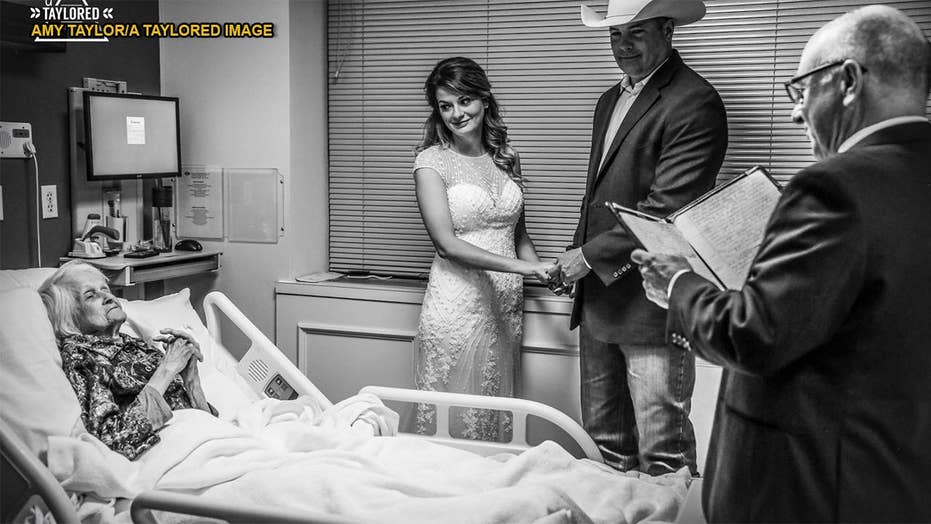 Sky Howard and Clay Cameron, already scheduled to be married in a New Year's Eve wedding, brought an early ceremony to Charlotte Bussard, Cameron's ailing 100-year-old grandmother, after a recent decline in health. Preparing for the worst, the couple surprised the centenarian by hosting an unofficial wedding in her room at Hemphill County Hospital.

A couple in Canadian, Texas, couldn’t imagine getting married without the groom’s 100-year-old grandmother in attendance — so they brought the wedding to her.

Sky Howard and Clay Cameron have their actual wedding ceremony scheduled for New Year’s Eve, but they decided to stage a sneak preview for Clay’s grandmother, Charlotte Bussard, after her health started to decline.

“That day, she was up and listening and surprised. Smiling the whole time,” the groom said of his grandmother. (Amy Taylor/A Taylored Image)

“My grandma had gotten pretty bad, pretty quick. We were all thinking within a few days, that would be the end,” Clay told Fox News, adding that she had even stopped eating and drinking.

Preparing for the worst, Clay said Sky cooked up the idea to hold an early, unofficial ceremony at the Hemphill County Hospital on May 29 — and it came as a complete surprise to Bussard.

“They told her something was going to be happening, they didn’t tell her what,” Sky told Yahoo Lifestyle, adding that Bussard got dressed up for the occasion with the help of hospital staff.

“My grandmother has always liked dressing up, and seeing everybody dressing up,” Cameron told Fox News.

Sky had also revealed that she and Clay opted for a tiny ceremony consisting of just themselves, Bussard and Dr. Frederick of the Hemphill County Hospital.

Sky came up with the idea for the early ceremony, and Clay said they were able to throw it together in just a few days. (Amy Taylor/A Taylored Image)

Frederick – also a longtime friend of Sky’s – even pulled double-duty as the couple’s officiant.

“He just had a dress shirt on, so he snuck off and went back home, and showed back up with a suit and tie,” Clay laughed. “I guess he felt a little underdressed… He did a great job.”

And according to Clay, Bussard thoroughly enjoyed the surprise.

“That day, she was up and listening and surprised. Smiling the whole time,” he said. “She was just tickled.”

Clay said Bussard is even doing a bit better now, having returned to the nursing home where she’s currently eating, drinking and “walking around.”

“If she still around, she’s absolutely coming [to the New Year’s Eve wedding],” Clay said.

In the meantime, Clay told Fox News he’s been showing Bussard some of the stories that have been written about the ceremony.

“We’ve given her a hard time about being a celebrity,” he joked.