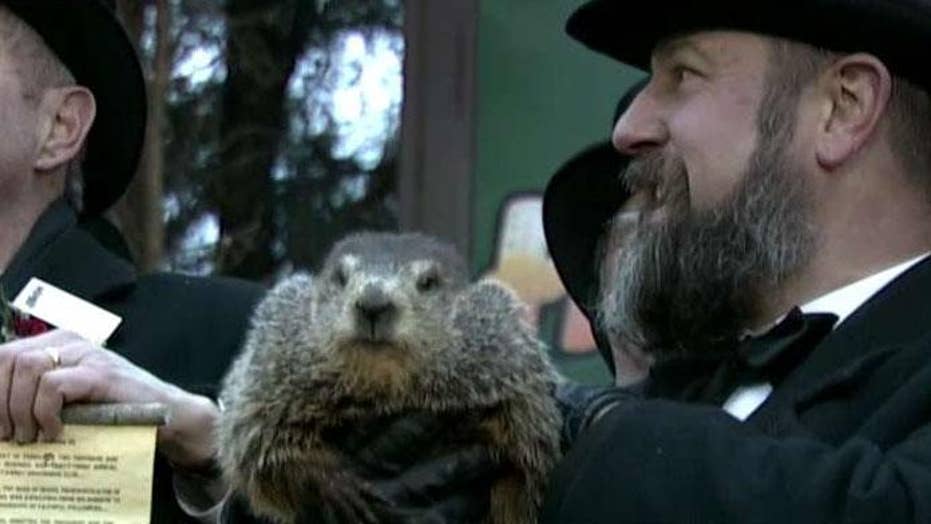 America's most famous groundhog, Punxsutawney Phil, did not see his shadow Saturday and predicted an early spring.

Members of Punxsutawney Phil's top hat–wearing inner circle revealed their forecast at sunrise on Saturday. However, Phil's prediction is decided ahead of time by the group on Gobbler's Knob, a tiny hill just outside Punxsutawney, which is located about 65 miles northeast of Pittsburgh.

GROUNDHOG DAY FESTIVITIES AND A LOOK AT PUNXSUTAWNEY PHIL'S ACCURACY

According to legend, if the rodent sees its shadow, then it will retreat back to its burrow and winter will continue. But if it doesn’t see a shadow, due to overcast skies, then spring will arrive early.

PUNXSUTAWNEY PHIL AND 7 OTHER FAMOUS GROUNDHOGS YOU SHOULD KNOW

Last year, Phil saw his shadow. Like Phil, there are other famous groundhogs people will be watching for on Saturday. Staten Island Chuck, formally known as Charles G. Hogg, lives in New York's Staten Island Zoo. In 2014, during a Groundhog Day ceremony, New York City Mayor Bill de Blasio dropped the rodent, who had been secretly replaced with the original Chuck's granddaughter Charlotte. Days later, Charlotte died, though the zoo said it was unlikely the fall caused the death. Since 2015, de Blasio stopped attending Staten Island's Groundhog Day ceremony. Former New York City Mayor Michael Bloomberg didn't have much luck with groundhogs either. In 2009, Bloomberg was bit at a Groundhog Day ceremony.

Phil's prediction is good news for the Midwest and East Coast of the U.S. This week, an intense polar vortex covered much of the Midwest before making its way to the East Coast, bringing subzero windchills and snow.

Fox News' Jennifer Earl and the Associated Press contributed to this report.