Whether they're "132 years old," college educated or known biters — every famous weather-predicting groundhog in the U.S. is unique.

And every year, people anxiously watch as the groundhog exits its warm burrow and forecasts the weather for the six weeks to follow.

This year was no different when Punxsutawney Phil came out of hibernation and predicted an early spring -- the groundhog did not see his shadow, unlike in 2018.

GROUNDHOG DAY FESTIVITIES AND A LOOK AT PUNXSUTAWNEY PHIL'S ACCURACY

Read on for more on the famous groundhogs who will reveal this year's forecasts on Feb. 2.

"Punxsutawney Phil" has been around for more than a century.

The Pennsylvania club claims the creature is 132 years old.

Phil may be the "oldest" and most famous groundhog in the U.S., but that doesn't mean he's the most accurate.

The four-legged creature only has 39 percent accuracy, according to Stormfax Almanac's data.

Phil sees his shadow about 85 percent of the time. A look at records dating back to 1887, when the tradition started, show Phil has seen his shadow 104 times and hasn't seen it just 18 times. There are nine years that weren't reported.

Chuck, formally known as Charles G. Hogg, lives in New York's Staten Island Zoo, and he's been known to be a bit grumpy.

In 2009, the moody rodent bit former New York Mayor Michael Bloomberg on the finger as the official reached into his cottage to bring him on stage.

During a 2014 Groundhog Day ceremony, New York Mayor Bill de Blasio dropped the animal, who had been secretly replaced with his granddaughter Charlotte. Days later, Charlotte died, though the zoo said it was unlikely the fall caused the death.

The next year, the zoo protected the creature with a layer of plexiglass, separating the animal from the mayor.

We have another biter.

Jimmy, the official groundhog of Sun Prairie, Wisconsin, famously bit the ear of then-Mayor Jonathan Freund as he was attempting to "listen" to the critter's prediction during a Groundhog Day celebration in 2015. 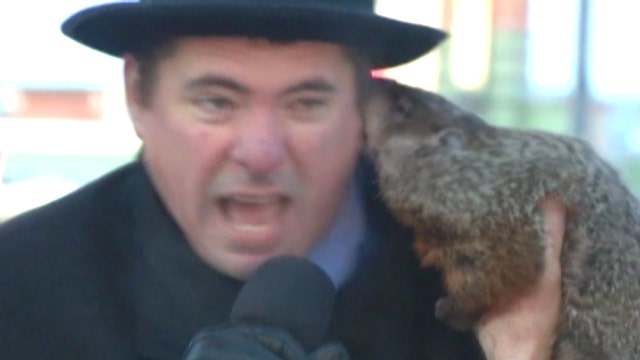 Videos of the incident went viral, prompting a warning from the USDA about capturing wild animals. The groundhog was then released back into the wild, Fox 6 reported in Jan. 2016.

City officials found an authorized replacement "Jimmy" a year later, and the celebrations continued, though Jimmy now remains in a cage during the ceremony as an added safety measure.

Buckeye Chuck is one of two famous groundhogs in the state of Ohio. Buckeye Chuck was declared the state's official Groundhog Day representative in 1979.

Georgia's weather predicting groundhog, Gen. Beauregard Lee, may be the most educated of the bunch.

The wise groundhog, who recently moved to Dauset Trails Nature Center in Jackson, Ga., has received honorary doctorates from the University of Georgia for "Weather Prognostication" and Georgia State University for "Southern Groundology."

"He’s also been honored by the National Weather Service twice for his reliable forecasts," The Atlanta Journal-Constitution reports.

According to the Journal-Constitution, Beau is the “bachelor nephew” of the Yellow River Game Ranch's late groundhog, Gen. Lee, who held the post of "chief rodent prognosticator" for about a decade.

Chattanooga Chuck is one of the Tennesee Aquarium's most popular residents. He has lived there for at least eight years.

But when it comes to making his weather prediction, Chuck gets plenty of assistance.

The female groundhog, whose non-stage name is Sidewinder, rose to fame after she was featured in an article in the Dunkirk Evening Observer. The local newspaper is also responsible for coming up with the groundhog's famous nickname.

"I have used a groundhog for over 58 years to predict the coming of spring weather," owner Bob Will, a state-licensed wildlife rehabilitator, said in a statement online. "Dunkirk Dave is the second-longest predicting groundhog."

Thistle the Whistlepig is still a youngin', but she still knows how to get the job done.

The groundhog made her first weather prediction in 2016 at just 8 months old and she's continued the tradition ever since.

As the runt of the litter, Thistle was ignored by her mother and was eventually relocated to the museum, where she now lives with an adult male named Lake Erie Eddie.