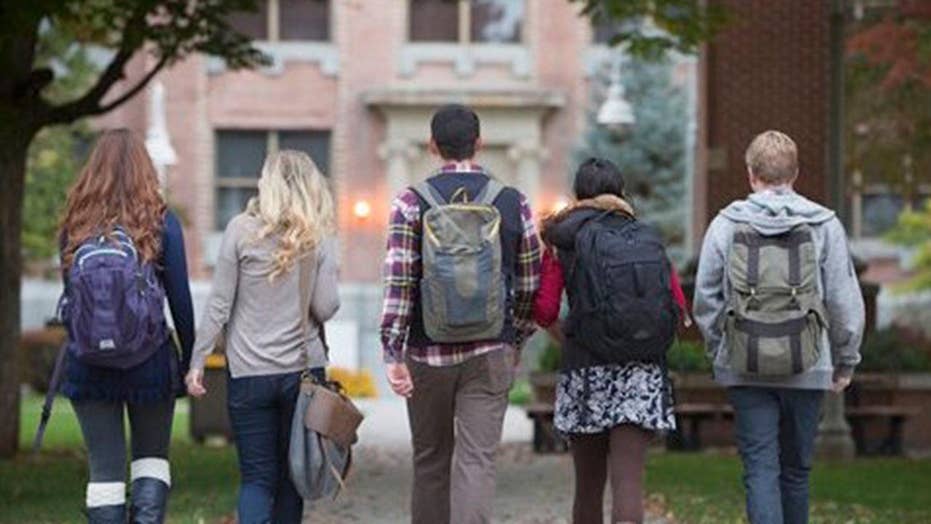 Over the past few years, colleges have rolled out stringent policies that have had a chilling effect on free speech on campus – and now the Trump administration and Republican members of Congress want to loosen those rules.

A higher-education reform bill proposed in the House would force colleges to scale back rules critics say have severely restricted free speech on campus. The bill would give speakers, especially ones deemed controversial – like Ben Shapiro or Ann Coulter – more leniency to speak at colleges and would allow religious groups to choose members that actually share their religious beliefs.

With 500 people attending, conservative political commentator Ben Shaprio delivers an address at the University of Connecticut. UConn's College Republicans on Wednesday, Jan. 24, 2018, welcomed Shapiro, editor-in-chief of conservative news and commentary site The Daily Wire. His appearance at the University of California, Berkeley sparked protests when he spoke there last fall. (Mark Mirko/Hartford Courant via AP)

U.S. Rep. Virginia Foxx, R-N.C., the committee chairwoman and the chief author of the Promoting Real Opportunity, Success and Prosperity Through Education Reform (PROSPER) Act, said the bill will roll back many “ill-conceived mandates handed down by the Obama administration” and be replaced by policies that will help current students.

A spokesperson for the Committee on Education and the Workforce told Fox News the bill would reverse overreaching rules that have suppressed free speech on college campuses.

“The PROSPER Act is sending a strong message to the higher education community that these important issues cannot be ignored and campuses across the country, must do more to stand by First Amendment principles,” the spokesperson said. “The PROSPER Act ensures Congress’ intent is clear, and that students and organizations have the mechanisms necessary to help protect their rights.”

The Trump Administration released a statement trumpeting the bill.

“Congress should create a framework for reforming America’s higher education law that protects academic freedom and promotes the exercise of free speech on college campuses for faculty and students,” the White House said.

Some controversial conservative speakers who have been invited to speak on campus in recent years have seen their invitations rescinded by college administrators who have feared a backlash.

The Young America’s Foundation, a student group that invites conservative speakers on campuses across the country, said it welcomes the bill.

Another rule the bill may roll back is so-called “free speech zones” at college campuses, which critics say has allowed colleges to censor speech.

Joe Cohn, the legislative and policy director for the Foundation for Individual Rights in Education, or FIRE, a free-speech advocacy group, told Fox News he hopes the bill eliminates them.

Cohn said FIRE is also working with Congress to strengthen campus due process rights and bolster freedom of association, allowing college groups to be able to choose their members and leadership positions based on their values or interests.

“Expressing the sense of Congress that free speech zones and restrictive speech codes are inherently at odds with the First Amendment and public institutions receiving funds under the HEA should not restrict the speech of their students,” the PROSPER act reads.

A Christian student group at the University of Iowa recently sued the university for discrimination after it was booted from campus for requiring student leaders to embrace Christian religious beliefs – including a clause on sexual morality.

“Prohibiting any public institution that denies a religious student organization any right, benefit, or privilege generally afforded to other student organizations on the basis of the organization’s religious beliefs, practices, speech, membership or leadership standards, or standards of conduct from receiving funding under the HEA,” the bill says.

The bill has drawn sharp criticism from college administrations who fear a loss of authority over their own campuses and from LGBT groups who see the bill as a license to discriminate.

The annual Pride Parade is replaced with a Resist March as members of the LGBT community protest President Donald Trump in West Hollywood, California, June 11, 2017. (Reuters)

David Stacy of the Human Rights Campaign, a gay rights group, told the New York Times the implications could be far-reaching.

“You’re not just talking about a little Bible college,” Stacy told the Times. “When you think about Catholic universities, there are a lot of those, and quite a few of these universities would discriminate against same-sex student relationships.”

Foxx said she expects the bill to make it through the House, though it will need bipartisan support in the Senate in order to make its way to the president's desk.