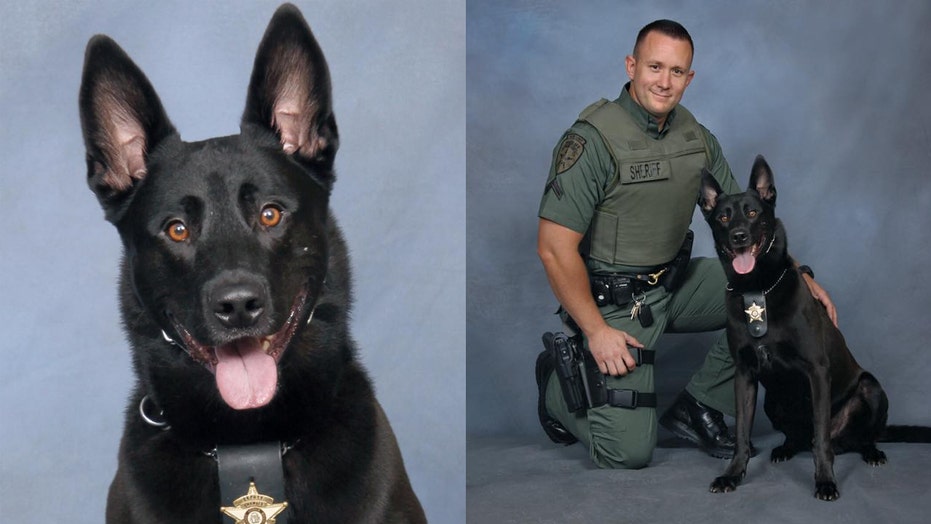 A Georgia deputy, who authorities said “followed his training,” shot and killed a police dog after the canine bit him during a pursuit, officials said Monday.

The Paulding County Sheriff’s Office wrote in a Facebook post on Monday that K-9 Verro, an eight-year-old Belgian Malinois who was handled by Corporal Brandon Kilgore for more than seven years, was shot by another deputy who had been bitten from behind while he was running after a suspect.

“K-9 Verro was the kind of working dog that any handler would dream of," the sheriff’s office wrote. "He had a high drive to fight crime and was relentless in his work ethic.”

Deputies said they responded to a domestic dispute Friday afternoon in Dallas, Ga., approximately 30 miles northwest of Atlanta, and spotted a man matching a suspect description inside a car. When they tried to stop the car, deputies said the passenger, who was later confirmed to be the suspect, took off on foot.

Kilgore arrived on scene and spotted the suspect running so he immediately stopped his patrol vehicle and ran after him, according to the sheriff’s office, which added that he left K-9 Verro in the SUV since “the departmental criteria to deploy the dog had not been met.”

“Anyone that knew K-9 Verro knew how attached and protective he was of his handler,” the Facebook post said. “When Corporal Kilgore left his patrol vehicle chasing someone, K-9 Verro wanted to be with him as the two were inseparable.”

Deputies said K-9 Verro was able to “squeeze through” the partially open kennel door that separates his vehicle kennel from the driver’s compartment and was then able to “inch his way out of the vehicle” through a window left partially open.

Once outside, the sheriff’s office said, K-9 Verro spotted a deputy running and since he could not differentiate between the deputy and the suspect without his handler present he “apprehended the Deputy by grabbing the back of his leg and followed his training by biting and holding until he was commanded to release.”

The deputy “had no idea the dog was actually a law enforcement canine,” especially since K-9 Verro bit him from behind, investigators said.

“Unable to remove the dog from his leg, the Deputy followed his training, drew his service weapon and shot and killed K-9 Verro,” the post said.

“This has been a devastating incident that has shaken our office to its core,” the sheriff’s office added.

Paulding County Sheriff Gary Gulledge asked for prayers during the “difficult time” saying, “Being a former K-9 handler, I know how special the bond is between a handler and his dog.”

“The emotional grief everyone is going through, including the Deputy who was bitten, has been overwhelming.”

The deputy who was bitten was injured but “will heal with time,” according to the sheriff's office.

The suspect was taken into custody.