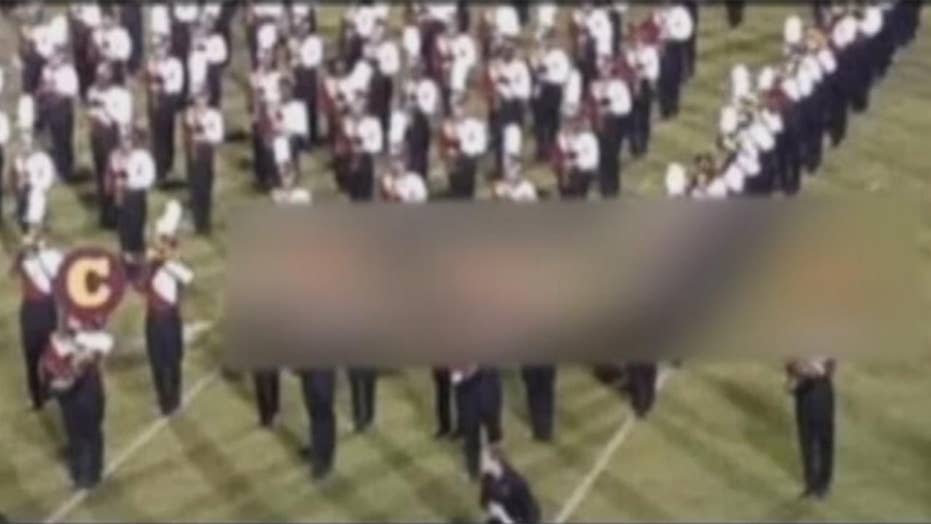 Several members of a Georgia high school marching band are in hot water after the large letters attached to their sousaphones spelled out a racial slur during a halftime show Friday night.

Some members of the Brookwood High School marching band use instrument covers that, when correctly lined up, spell out the school's nickname, "Broncos." On Friday, however, some of the letters appeared rearranged and spelled out an anti-black slur.

Principal Bo Ford said Monday in a statement that the matter was a prank: “As promised, we started an investigation into this matter, and I wanted to share with you our current findings and the steps we are taking with the students who were involved. After extensive interviews with many students, we have determined that three seniors intentionally planned and executed the use of the sousaphone covers to spell out a completely unacceptable, racist term. The fourth student, a junior, who carried one of the letters spelling out the word, appears to have gone along with the plan at the last minute. However, all four of the students knew what was going to happen and knew what they were spelling out during the halftime show. In our interviews, the students-- two of whom are African American, one of whom is Asian, and one of whom is Hispanic - indicated that this was intended as a joke, one that they thought would be funny. However, they acknowledged that they knew this racist term was not acceptable. We have identified two other students who do not appear to be involved in the planning and execution but did provide false information to school officials. All six of these students will receive discipline consequences commensurate with their involvement in this incident.”

Ford previously had apologized to parents and the community in a letter, saying the halftime show was “hurtful and disrespectful to audience members.”

“It was also disappointing, as it does not reflect the standards and beliefs of our school and community,” he went on to say, according to the Gwinnett Daily Post.

Members of a Georgia high school band used letters on their instruments to spell out a racial slur. (Courtesy of Shawn Myers)

The sousaphone is a large horn instrument that wraps around the player. The band uses covers over the horn's mouth when sitting in the stands, but the covers should have been removed during the halftime performance, Ford said.

He said the activity on the field was “very busy” and that “several personnel challenges” during the senior night activities resulted in the band’s director not being on the field during the performance.

“With that in mind, when the sousaphone players took the field, they did not follow band rules and normal practice, and instead, they left the covers on their instruments,” Ford said.

Some parents told Fox 5 they wanted to see the students who were responsible expelled.

“You’re bold enough on senior night, that means your parents your grandparents are there…you’re bold enough to spell those words and stay there long enough to have everyone take pictures?” Shawn Myers, whose son is a freshman in the marching band, told Fox 5. “That’s not right.”