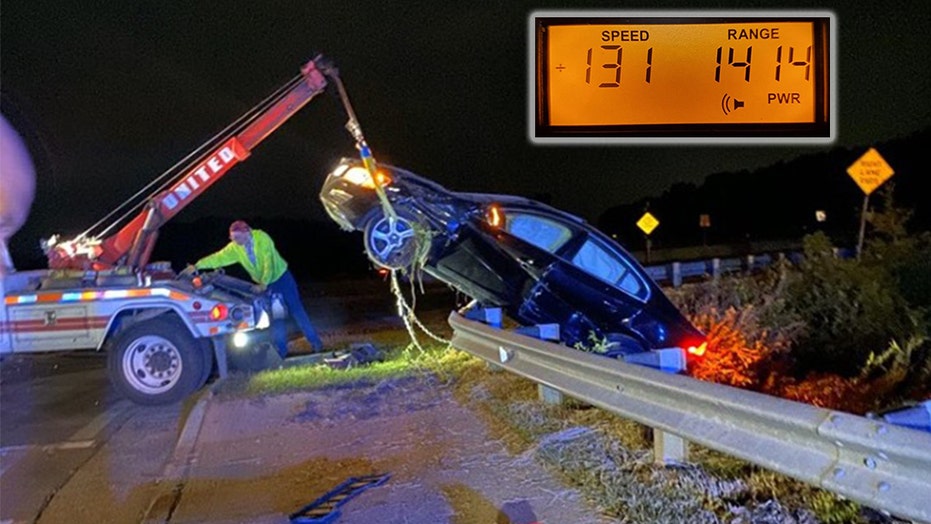 Georgia police clocked a 33-year-old man going at least 131 mph while driving down a highway Saturday morning before he crashed.

The unidentified suspect evaded police while driving his Volvo down Ga. 400 in Alpharetta before crashing into a concrete median and flipping over a guardrail, according to a Facebook post by the Alpharetta Department of Public Safety.

Police attempted to catch up with the driver, who reportedly accelerated when he saw the flashing blue lights of the officer's vehicle.

HERE'S HOW TO CRUSH A CAR WITH A TANK

“He tried to exit at McFarland Pkwy but was going too fast, went airborne across McFarland, hit the concrete median, and flipped over the guardrail. He was able to walk out," police said in a statement.

Photos of the incident show the wrecked vehicle being towed out from behind the guardrail, as well as the suspect's 131 mph speed captured on the officer's radar gun.

The man was charged with driving under the influence, driving with an open container of alcohol, reckless driving, speeding, fleeing and eluding from law enforcement.

“While this driver is facing several charges, we’re so very thankful we didn’t have to deliver a fatality notification to his, or anyone else’s family,” the department said.

They added: "Folks, please talk to your friends and family, share this post, and be careful out there."

An Alpharetta police spokesman told the Atlanta Journal-Constitution the driver's name and booking information won't be available until Monday.