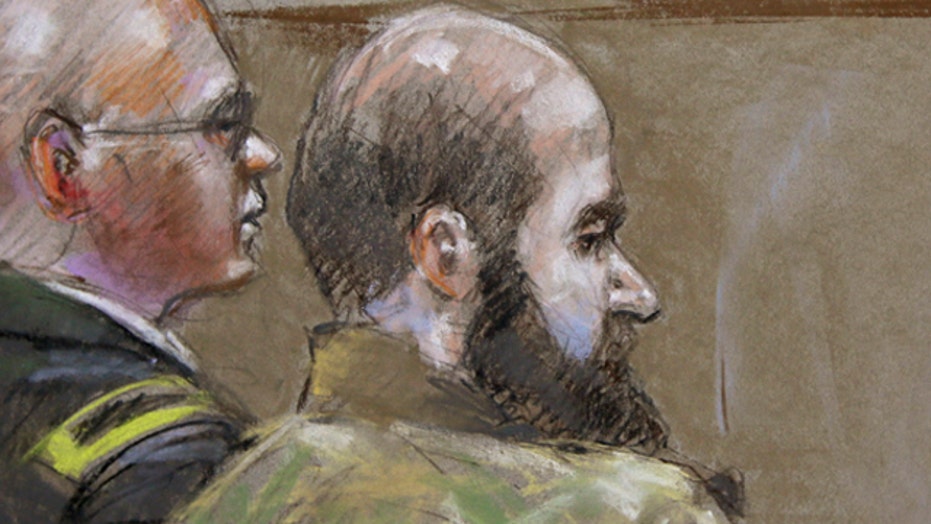 The sentencing phase of his trial was set to begin Monday.

A military jury deliberated for roughly one day before announcing the verdict.

Hasan sat emotionless, stroking his beard when the judge announced a verdict had been reached. He stood and looked at the juror panel president when the verdict was read, then turned and looked back down.

A few family members of the victims cried and hugged each other at the announcement, but there were no courtroom outbursts.

Hasan, an Army psychiatrist, had acted as his own attorney at the 13-day trial, but questioned only three of nearly 90 witnesses and presented only a single piece of evidence in his defense: an evaluation from his boss that called him a good soldier. He also chose not to make a closing statement.

The American-born Muslim told jurors during a brief opening statement  that evidence would "clearly show" he was the shooter, and he described himself as a soldier who had "switched sides."

Military attorneys assigned to Hasan -- who remained on standby throughout the trial as he went it alone -- have suggested he wants to be put to death.

On Thursday, military prosecutors asked jurors for a unanimous conviction on the premeditated murder charges, which would allow them to seek the death penalty -- the government's priority in the case.

In order for Hasan to face the death penalty, the jury's 11 men and two women had to find him unanimously guilty of at least one count of premeditated murder as well as another murder charge. The military court system hasn't executed an active-duty U.S. soldier since 1961.

During closing arguments, prosecutor Col. Steve Henricks described how, when Hasan learned he would be part of a unit deploying to Afghanistan, he visited Guns Galore, a firearms store in Killeen, adjacent to Fort Hood about 70 miles north Austin. Hasan asked for advice and bought the most high tech, highest-capacity pistol available.

Hasan later trained at an off-base gun range and used laser sights. He eventually carefully targeted a medical building he knew would be crammed with soldiers preparing for or returned from overseas military deployments -- mostly in Afghanistan or Iraq -- the same day his unit would be at the building.