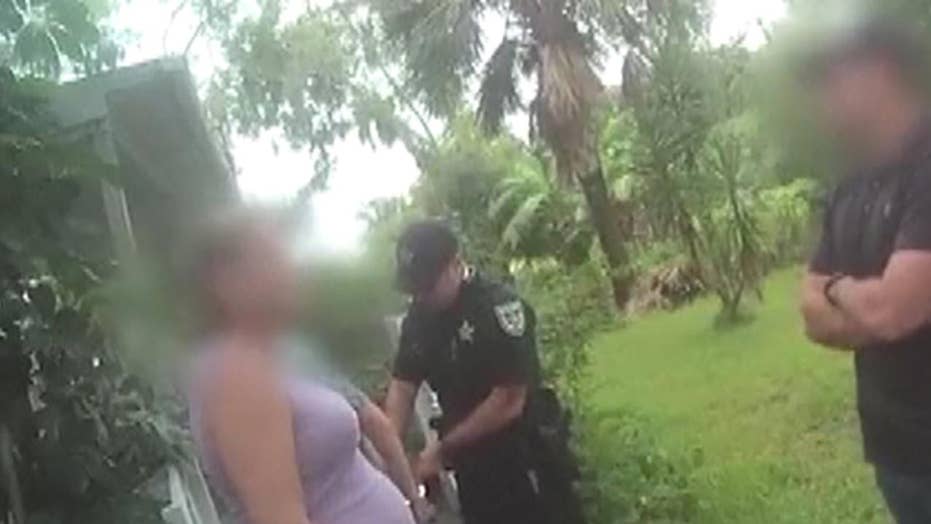 Raw video: Video released from the Volusia County Sherriff’s Office shows a Seabreeze High School student being arrested after threatening to 'kill seven people at a minimum' in a video game chat room.

A Florida mother defended her son as "just a little kid playing a video game" after authorities accused the teen of threatening a mass shooting at his school — a felony in the Sunshine State.

Authorities say the unidentified male, a 15-year-old student at Seabreeze High School in Daytona Beach, wrote in a video game chat room: "I Dalton Barnhart vow to bring my fathers m15 to school and kill 7 people at a minimum." Officials said "Dalton Barnhart" was a pseudonym and not the teen's actual name.

The comment was reported to the FBI, and the FBI notified the Volusia County Sheriff's Office. Bodycamera footage posted online by local officials Monday showed the teen's Friday arrest and captured his mother's emotional attempts to defend her son.

"These games, these kids say stuff like that all the time. It is a joke to them, it's a game," the mother is heard telling deputies, questioning how her son could be arrested for making a comment online. Investigators explain to her that, per Florida state law, written threats to kill, do harm to others or conduct a mass shooting or an act of terrorism are a felony crime.

FOX NEWS POLL: MOST BACK GUN RESTRICTIONS AFTER MASS SHOOTINGS, TRUMP RATINGS DOWN

The mother is seen breaking into tears as she tells the responding deputies repeatedly that her son is just a child.

"He's just a little boy. He didn't do anything wrong. Yes, he's a teenager, but he's still a little boy and he's not one of the crazy people out there doing stuff," she said. "He shouldn't be treated as though he is a terrorist or something because he made a silly statement on a stupid video game."

Authorities tell the woman about the frequency of mass shootings, especially at schools and among teenagers, but the boy's mother insists such situations need to be examined on a case-by-case basis.

At one point, the mother says she owns a gun, but insists her son would never grab it or use it.

"Unfortunately in this day and age, this is what happens. Kids get on these things and they say this, and parents say, 'It's not my son,' and then it might not be your son but unfortunately somebody's son does," one of the deputies says. "This is the world we're in, where kids are getting shot at school while they're trying to learn."

He adds: "Unfortunately, we can't take risks, and we can't say, 'All right, we trust that this guy's not gonna do it and then it happens and then we say, 'Well we had the chance. "

The sheriff's office wrote in a Facebook post: "Joke or not, these types of comments are felonies under the law. After the mass violence we've seen in Florida and across the country, law enforcement officers have a responsibility to investigate and charge those who choose to make these types of threatening statements."

Investigators said the teen is facing a felony charge and set to be transported to a juvenile detention center.